“A climb to the second highes peak of Aragats Mountain in the Republic of Armenia. ”

Cell service (via Viva Cell - Mts) is almost always available on the run to Mt. Aragats, and 911 emergency services operate in Armenia in the case of any accidents. Be sure to bring bottled water.

This run begins at an altitude of 3,250m above sea level. The starting point is located near the cold, freshwater lake known as Kari Lake (Stone Lake). The beauty of this mountain lake is enhanced by the surrounding alpine meadows, varied wildflowers, fresh mountain air, and the backdrop of the snow-covered peaks of Aragats.

The best time to run here is around the middle of May. The weather should be warm, although the area is usually still covered with snow. There is a 1-2 km road leading to the lake, and on either side of the road, you'll pass by 2-3 m high snow formations that have been melted into interesting shapes by the sun. These snowy formations will entirely melt by the end of July, and the rest of the snow in the surrounding area will be completely melted sometime between August and September.

Aragats was formerly one of the largest volcanoes in the world. It has four peaks and an immense crater (with a depth of 400m and 3km in diameter). While the North Summit of Aragats Mountain is the highest mountain top (4,090m) in the Republic of Armenia, the South Summit, which is 3879 m high, is a popular and somewhat easier run than the North Summit. On the slopes, you'll come across small rivers caused by ice and snow melt, but the rest of the route is relatively easy except for the steady climb.

Legend of Aragats: The origin of the name of Aragats is ascribed to either Hayk’s son, Aramanyak, or to the God, Ara (Aragats - Ara’s throne). Once the mountain had only one big peak, but over the course of centuries, earthquakes and strong volcanoes resulted in the splitting of the mountain into several parts, thus creating the four peaks of Aragats which can be seen today.

There is a hotel-restaurant located near Kari Lake which is famed for serving khash–one of the most tasty dishes in Armenian cuisine. Khash represents a special ritual: it is prepared using domestic animals’ (cow, bull, calf) legs, heads, and tongues. The preparatory work lasts for 1-2 days, while the cooking duration is 6-10 hours. The table setting also has its rules: on the khash table, it is necessary to put salt, garlic, different herbs, radish, dried lavash (traditional Armenian thin bread), other types of bread (baked only in Armenia and only by Armenians) and wet lavash; alcoholic drinks like vodka can also be a part of the khash table. This traditional Armenian feast of khash usually begins early in the morning on Saturday or Sunday.

Flora: Semi-desert, dry mountain grasslands, alpine and snowy zones follow after each other in the region of Aragats. The rivers flow through low grass covered valleys and small gorges, forming rapids and waterfalls from time to time. People from different corners of the world come here to see Aragats, to enjoy the mountain alpine zone and the meadows decorated with varied flowers. There are small, blue forget-me-nots and alpine violets growing here. The meadows are abundant with fragrant flowers–violets, wild lily, poppies, bellflowers and so forth. Snowy vegetation and “alpine carpets” are typical to this high mountainous zone (2,800-3,400m). There is also a small oak forest located on the southern slope (1,800-2,300m).

Fauna: It is possible not to encounter any animals during this run, because of the harsh weather conditions . The fauna of Aragats includes dipodidae (a rabbit-like mouse), hare, fox, wolf, brown bear, lizard, lots of birds, and sometimes turtles. 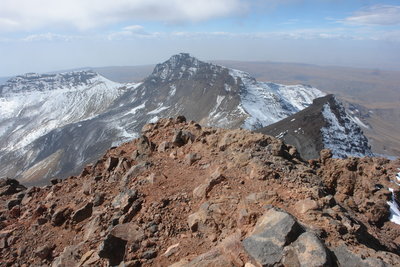 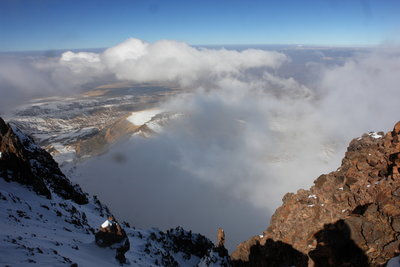