“An easy two-hour loop to the Hidden Palms Oasis within the Coachella Valley Preserve. ”

The visitor center parking lot is open from 7-5. Do not park there if you'll be running beyond these hours. Take plenty of water. There is none on the trail. This trail is not recommended in the summer unless you plan to complete the loop by 9 AM. The summer heat can be devastating.

Because of sandy soils, it is recommended to have gaiters.

The trail can be found north of Interstate 10 in the Coachella Valley of California. From the West, exit Bob Hope Drive and turn right on Bob Hope. Make an immediate left at Ramon and drive 5 miles east. Turn left onto Thousand Palms Canyon Road and the trailhead is on the right. From the east, exit Washington and turn right heading north for five miles. The road turns to the left and you'll continue 1.8 miles before turning right on Thousand Palms Canyon Road.

The beginning of the run can be a little confusing as you head east from the trailhead. The same trail can take you to Pushwalla Palms, Indian Palms, Willis Palms, or Hidden Palms. Head east initially as the trail to the immediate left takes you to Indian Palms or the Visitor Center. After a few hundred yards, you'll get to a junction. There are marked stakes in the ground and you'll follow the trail to the right and head south toward Willis Palms and Hidden Palms.

Head to the left and you'll head into Pushwalla Canyon. At this point, you are at the base of rising terrain. You'll head south through a sandy trail that is marked by rock outlines and stakes that will either say Willis Palms or Hidden Palms. After another few hundred yards, you'll come upon the beginning/ending of the loop. If you want to go clockwise around the loop, you'll turn left and go up a rather steep incline or continue straight south toward Ramon/Washington Street. The trail hugs the bottom of the rising elevation to the left and takes you through the many washes created by water leaving the hills.

This is typical desert vegetation with creosote bushes and some cactus varieties. It is no doubt very beautiful during wildflower bloom, but most of the year it will be dry brush and sand. After about a mile or so, the trail heads left to Hidden Palms and right to Willis Palms.

For this trip, you head left and follow the trail eastbound to the north of Ramon Road. Eventually you'll intersect a dirt road and a structure to the left. At this point it is not quite clear what is the trail and what is the road, but follow the trail/road to the left past the structure. You should now be heading generally north and should see the Hidden Palms Oasis in the distance. The trail stays to the right of a direct line to the Oasis, but eventually heads back toward it. There are many paths through the Oasis, but head north and begin climbing on the path to return to the visitor center.

Fan palms, cactus, creosote bushes, brittlebush, cactus wren, lizards, road runners, rodents, rabbits, cholla, and possibly a coyote or bobcat can be seen along this loop. This is also rattlesnake territory, so one should be very aware of where they put their hands and feet. Most of the trail is open and uncluttered, so you would likely see a rattlesnake if you were keeping aware. Their presence should not deter anyone from enjoying this run. 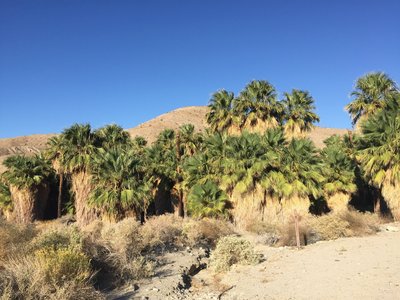 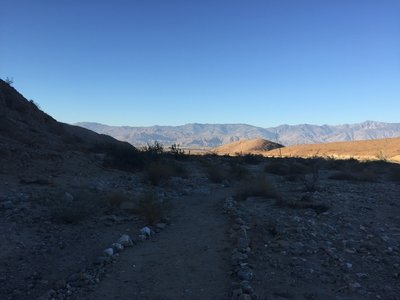 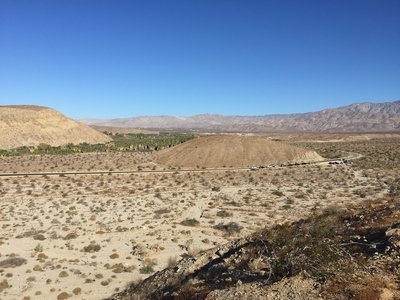 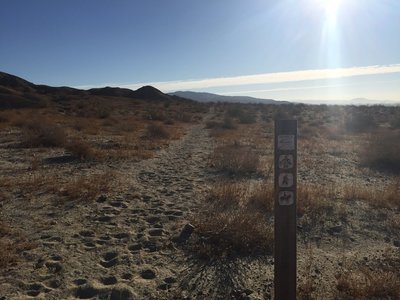 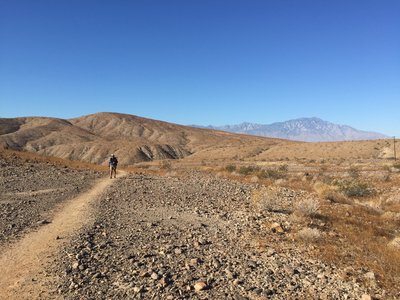