The highlight of this run is the Buco di Viso Tunnel which was completed in AD 1480.

Note: The road from Crissolo to Pian del Re is narrow, exposed, and without barriers. For 5 Euro round-trip fare per person (as of Aug 2016), a convenient shuttle bus runs hourly from Crissolo and back every Sunday between the end of June and mid-September, which corresponds to the opening season for this road, but daily for the most part of August.

I would recommend taking the shuttle option not only to avoid traffic congestion but also as the paid parking at Pian del Re may be full, and the shuttle is a more eco-friendly solution.

This run along the V16 trail leads to the Buco di Viso Tunnel which was completed in AD 1480 and is the oldest alpine tunnel. Although it was primarily dug for commercial scopes, it also served military purposes. The name of the tunnel translates to "Hole of Viso", although rather meaning "near" Mount Viso which isn't too far to the south.

The tunnel located at 2,950 m (9,678 ft) above sea level. After the passage through the 75 m (250 ft) dark tunnel—flashlights are suggested although not indispensable—this track proceeds on French soil to the Colle delle Traversette on the way back. Majestic peaks seen from several angles. The total elevation gain 1,100 m (3,600 ft).

Until recently, the French end of the tunnel was blocked by rockslides and had been for years, making it impassable. Recently, probably in 2014, French authorities authorized the restoration and consolidation works that made the tunnel passable. Before this, the border crossing was only possible through the Colle delle Traversette, which is also a suggested destination for its spectacular views.

in Pian Del Re

in Pian Del Re 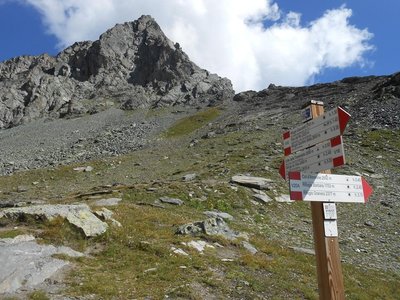 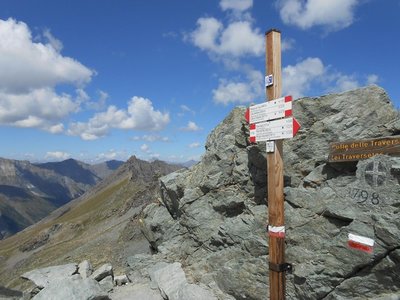 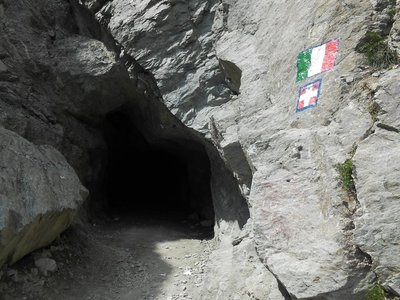 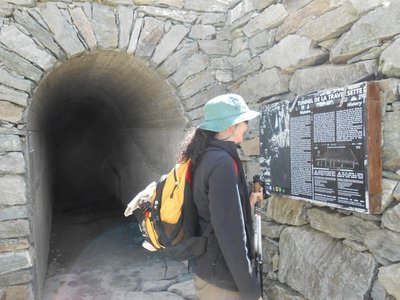