“A relatively unknown run to the summit of a sky island. ”

There are no restrictions, and no permit is required. But snow closures could GREATLY increase the running distance.

Tens of thousands of people see this mountain every day as they drive through the Sacramento Valley on I5. But even many avid runners have never set foot on Snow Mountain. For those willing to make the trip out to the Snow Mountain Wilderness, a mountain paradise similar to the Sierra, yet different, awaits.

Part of the charm of this run is getting to the Summit Springs Trailhead. Although it is not terribly far away from population centers like Sacramento and the Bay Area, the last 30 (or so) miles are slow going on one lane paved and gravel roads. Once at the trailhead, start the run by the restroom.

The trail first takes a dip down into a wooded area. At this point, you can sign in to let the forest service know that you are here in case of an emergency. The trail then climbs out into a meadow and up through an area with dense chaparral. If you are not starting your run early in the morning or later in the evening, this area can be quite hot from sun exposure. However, after making a quick turn about a mile into the run, you enter a cooler, shady, red fir forest somewhat similar to the Sierra. The trail switches back a few times through forest and mixed forest and chaparral as it climbs to a ridgeline. The trail then follows this ridgeline as it climbs to the top of the Snow Mountain massif. Along this section of trail, the trail passes through two Jeffry Pines known as the "Gateway Trees".

Upon reaching the top of the Snow Mountain Massif, the trail once again enters a red fir forest. This section is very reminiscent of similar forests in the Sierra. You soon come to a trail junction. Follow the signs and go to the left to the summits. After a brief descent, you'll find Cedar Camp (which actually has no cedars) at the edge of a meadow. This could be a nice place to camp if you plan to backpack. Be careful here, as this is actually a trail junction of sorts. But there is no sign as you approach the camp telling you this. Make a right and go through the camp (right by the fire pit). At this point, you can see the trail heading off across the meadow.

After Cedar Camp, the trail climbs gently through lush Red Fir forest for a little under a mile. The scene is very much like that at similar elevations in the Sierra. And you would never know that you are actually on a small island in the sky surrounded by lower and warmer country. The trail eventually reaches a well-defined summit. This summit, which is about three miles from the trailhead, looks like it has been used as a campground.

After this summit, you enter a relatively clear area that has been burned out by wildfire. You can see the east summit of Snow Mountain for the first time. Ghostly looking bare tree trunks surround you, along with a few live trees that escaped the fire. Some parts of this trail are quite overgrown by stickery whitethorn. The trail descends in a couple of sections here before climbing up to the saddle on the ridgeline connecting the two summits. It should also be noted that there are a couple of splits in the trail here. Just keep going straight on the main trail.

When you reach the saddle on the ridgeline connecting the east and west summits, a sign will indicate that you can go right to the east summit or left to the west summit. Use trails go to each summit. And each is about a quarter to a half mile from here. Pick and choose which one to go to first, and return to the saddle to go to the other. Both are EASILY doable in a day, as they are not too far apart and only involve about 200 feet of climbing from the saddle. I HIGHLY recommend doing both summits since they are actually quite different from each other in character (despite their proximity to each other). However, it appears that only the east summit has a register. Return the same way you came.

The trail starts out in a mixed Jeffry Pine and oak woodland. It then climbs into chapparal, before entering into a red fir forest. It then climbs onto a ridgeline with mixed forest/chaparral. On the top of the massif, the trail once again enters red fir forest, although much of this is burned out. Closer to the summits, the red firs decrease in stature and become rather sparse. The summits are both quite open. Deer are quite commonly seen on this trail. 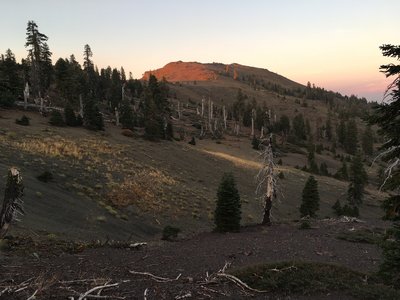 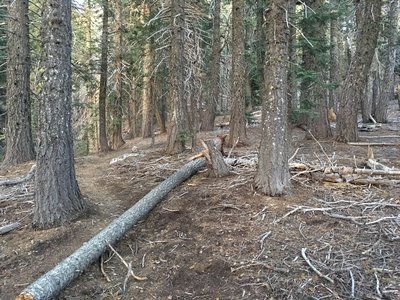 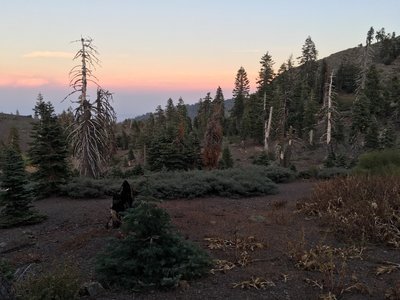 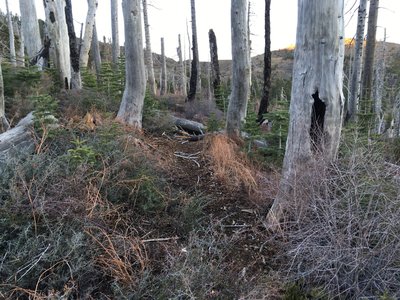 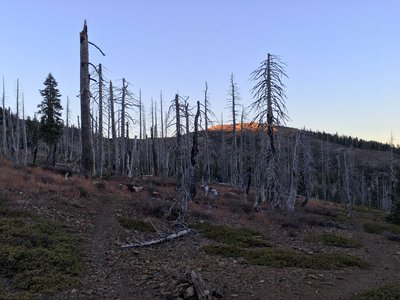