“The name says it all; jaw-dropping views of Davos in the valley below and the surrounding mountains. ”

This trail isn't called the Panorama Way for nothing; it is just awesome. The singletrack twists in and out along the side of the mountain with views of Davos and the Davosersee Lake, as well as the glacier covered peaks to the east.

Unlike some of the other trails in the area, the climbs and descents on this trail are pretty gentle and overall the trail generally hugs the side of the mountain. It's a pretty easy trail for those who don't want to or can't do a lot of strenuous running.

This trail starts at the Strelapass, which you can reach either by running up from Davos or taking the Parsennbahn funicular railway followed by the Parsenn to Strelapass trail. It ends at the Gotschnargrat summit where the Gotschnaboden cable car connects to the village of Klosters also offering easy access.

The most difficult thing regarding the Panoramaweg is trying to decide what to enjoy most: the run or the views. 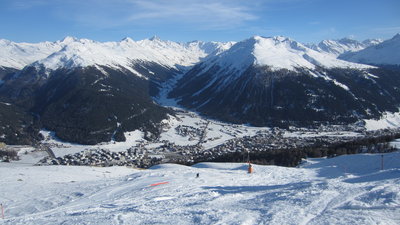