“This easy out-and-back run travels to a nice small lake in the Diamond Peak Wilderness. ”

This is an easy short run to a beautiful little lake in the Diamond Peaks Wilderness with views of Odell Lake and Diamond Peak on the way.

Mid-July is about peak mosquito season up here. Be prepared with good repellant and full-coverage clothing.

We started our run after parking at the PCT Trailhead parking on the north side of Highway 58. The entrance is just past the second Odell Lake turnoff if you're traveling west. We crossed the highway and started heading southbound. The trail is pretty well marked, but be aware that there are winter trails that intersect. These trails are marked blue with a blue diamond, and you'll see them until you enter the wilderness.

This is a relatively easy run to Midnight Lake with a slight incline, but in the summer the mosquitos on trail are fierce. They will swarm you and made the run slightly less than enjoyable.

After entering the Diamond Peak Wilderness, you'll gain elevation slightly before reaching the Midnight Lake Access Trail. This trail is not marked so you have to rely on a map, GPS, or the Trail Run Project mobile app. You can barely make out the lake from the PCT.

If you want to run around the lake, know that you'll need to bushwhack through dense undergrowth on the south lakeshore. If you're looking to spend the night, there are really only two sites to camp, both near where the access trail terminates at the lake.

Interestingly enough, the mosquitos were barely noticeable at the edge of the lake. However, waltz into the forest and you'll get swarmed.

After enjoying your time at Midnight Lake, simply follow the access trail back to the PCT and return the way you came to reach your car.

While we were at the lake, we saw a couple of osprey and heard some robins, but not much other wildlife. At about 5:30 PM the hatch at the lake began and fish became active at the surface. 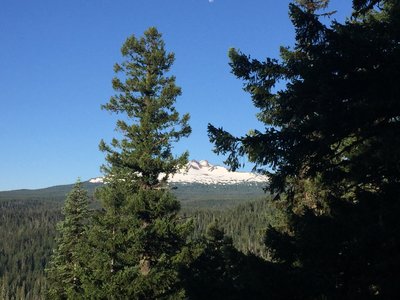 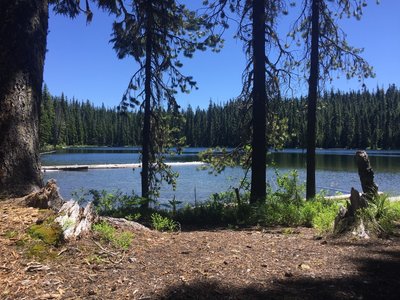 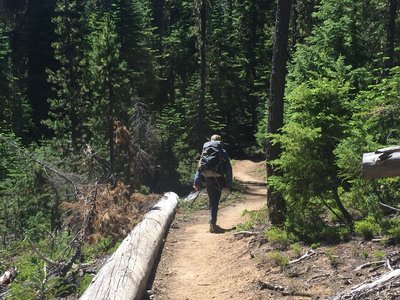