“A strenuous climb to a 12,700-foot glacial lake surrounded by rugged high-alpine charm. ”

Accessible year round by way of snowshoe, but the avalanche danger is high here.

Stay on trail to protect the fragile high-alpine grasses. Camping is allowed, but plan on moving your tent every two days.

Only experienced climbers should attempt the surrounding peaks. Be careful of loose scree.

With its more popular neighbor to the south - Ice Lakes - attracting most visitors, the lesser known Columbine Lake Trail still offers the best that the alpine backcountry has to offer.

Starting right in on the switchbacks, the trail gains its first 1,000 feet of elevation in no time as it ascends the expansive and heavily wooded eastern arm of Lookout Peak, bringing with it spotty views of the mountain peaks across the highway.

Just 1.1 miles from the trailhead, the route exits the trees, leveling briefly inside its first basin before climbing into its next. With the wider horizons, views of Anvil Mountain and Ohio Peak open up, as well as the higher 13,000-foot peaks that rise against Silverton’s southwestern edge. In the furthest distances, you can spot the imposing silhouettes of Arrow, Vestal and the three Trinity Peaks of my favorite sub-range, the Needles.

With a few more easy ups and downs, the trail reaches the eastern shores of Columbine Lake. From here, you can continue up the arduous scree covered slopes to Columbine Pass for a new perspective on Lewis Lake and Mine.

Another option is to stay to the runner's left of the trail that leads to the lake - there's an obvious alternative across a talus slope above the outflow stream. Climb the knob left of the lake - there are tremendous views of both the lake and across the valley at the Grenadiers and the peaks around Silverton. It's an easy run back down to lakeside and worth the effort. And just remember, the distance described in the run header as "3.3 miles" only covers the run UP to the lake!

Thick forests encompass the switchbacks of the lowest fourth of the trail before pulling out into the wide tundra above treeline.

You are likely to find a few chipmunks or marmots above treeline, as well as bears and deer in the forests.

For fisherman, Columbine Lake is rated good for brook trout. 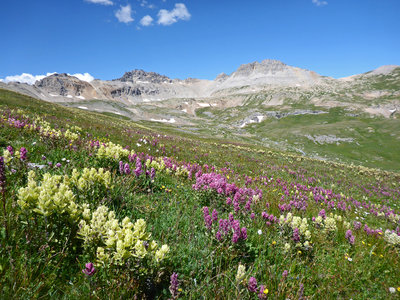 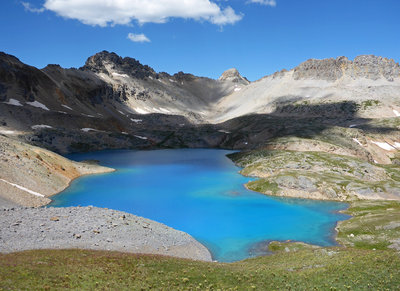 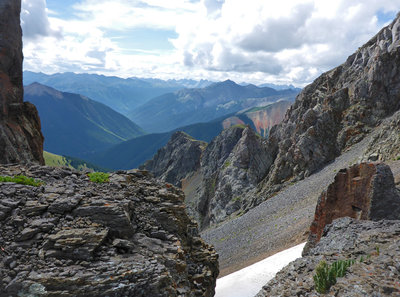 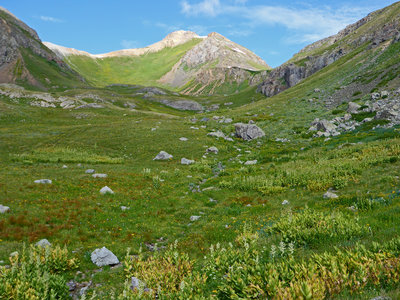