This park is criss-crossed by many paths and trails. It can be confusing to match the trails that show on one's smartphone with the trail signs in the park. For example, we wanted to go to the top of Mt. Victoria, and had a route picked out on our smartphones. When we got to the park entrance, we started following the obvious walkway according to its name and initial direction - Lookout Walkway, that would take us to the lookout at the summit of Mt Victoria. However, it soon deviated from the route we expected it to take. So, we kept following the Lookout Walkway Trail markers, and the result is this trail, its route, and its description. This was May 2017. In reading web postings about this park, we understand there is a master plan for it. Does that mean the trails and paths may change as the master plan is implemented? Perhaps, but we don't know. If you run this trail, please update this trail page, including the GPX, to keep it current as the future unfolds.

The Lookout Walkway to Wellington's Mt. Victoria Lookout starts in the center of Wellington at the east end of Courtney Pl./Majorbanks St. This is a footpath entrance to a forested city park.

The Lookout Walkway climbs steadily through a relatively thick forest for the first .4 miles. Glimpses of Wellington and the harbor below can be seen. After the first .4 miles, the trail comes out of the forest and follows a road for the last .6 miles to Mt. Victoria Lookout. Along the way, purple blazes will guide your way to the top.

Spectacular 360-degrees views of Wellington and its harbor can be seen from Mt. Victoria Lookout. 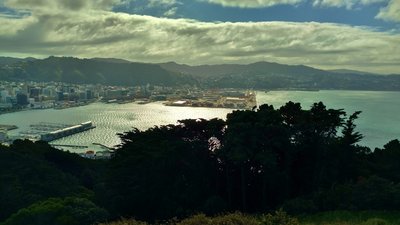 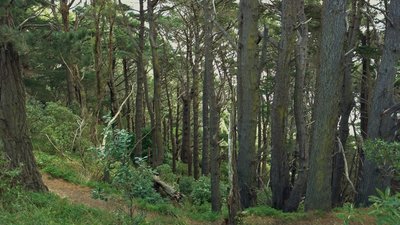 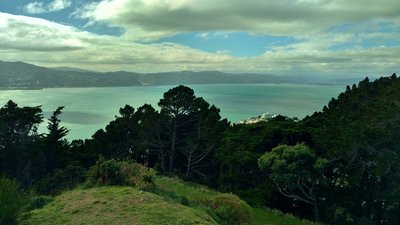 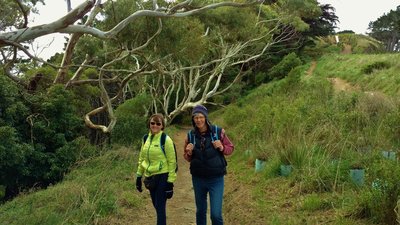