“Twin Peaks is one of Ouray's best kept secrets, despite boasting arguably the best bird's-eye view of town. ”

The steeps along this trail make trail running incredibly difficult and unadvised.

With two largely separate approaches to the summit, Twin Peaks is probably one of the most attainable trails in Ouray, but that doesn’t deter from the solitude you'll find here.

Gaining all of its 1200 feet of elevation in less than 0.7 miles, the old trail is the shortest and most direct route. In the mid-80s, a devastating rockslide tore through the mountainside, wiping this trail out. After nearly two decades, and only through extensive trail work, the route was re-opened in 2004. Now, more than ten years later, the trail is still holding up, thanks to 607 feet of cribbing put in place to stabilize it. Knowing the fact that the route never strays from this unstable talus slope, real caution should be taken. This trail is truly an undertaking, but it’s the most rewarding of the two options up Twin Peaks. Do heed the "steep and dangerous" warnings posted at the onset.

Deer, mountain goat and bighorn sightings, and the occasional mountain lion or bear can be experienced on any of the trails around Ouray. 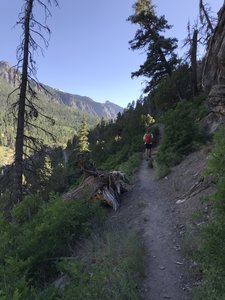