This loop hits all the highlights of Shakespear - from open pastureland to views across the water to downtown Auckland to a run along the beach, this fun loop has a little bit of everything.

A great trail run with some fun grassy hills to struggle up and bomb down.

Starting from the western parking lot, head out on the yellow-blazed Heritage Trail. The start of the trail can be a little hard to find, but head east down the road and look for the first yellow-topped post across a grassy field to get started.

The track starts with a gradual uphill through a tunnel of trees, and crosses the road where you'll have to enter and exit the park’s pest-control enclosure. From here, you'll run across a large pasture, making for the yellow-blazed marker at the top of the hill. The trail passes an old pillbox and joins a gravel road and the blue-blazed Lookout Track for a short way to the lookout.

From the man-made lookout, continue onto the Tiritiri Track, a fun trail with a few challenging hills and some lovely views from the coast of the bird sanctuary island Tiritiri Matangi Island. the trail turns east on a gravel road, skirting the edge of New Zealand Defense Force Land and several pastures.

At the northeastern most point, the trail turns south and heads through a gate into an open pasture. Here the doubletrack fades to grass and you are simply running through a field looking for the wooden post that marks the trail. This is a steep downhill, followed promptly but a tough but short uphill after which you pass through another gate. At this point, the next trail marker can be a bit tricky to spot and there are several cow/sheep tracks that look like vague singletracks through the fields.

Once you have found the next marker, continue through the gate, down some steps to the beach. At this point, you'll enjoy a short run along the water where you can watch people kite boarding on a windy day. There is also a nice view back toward downtown Auckland.

Once you exit the beach, look for the blue-blazed markers to connect to the Lookout Track. Head up a steep climb straight up a grassy hillside from the road near Te Haruhi Bay up to the Heritage Trail. Take a left on the Heritage Trail to finish out the loop. 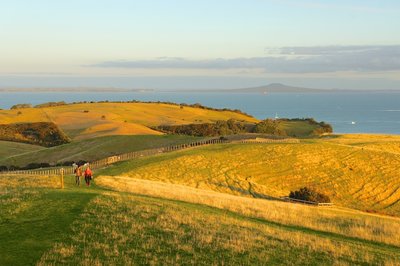