“One of the most spectacular and remote areas in the Sierra. ”

No campfires are allowed anywhere on this route.

The Kaweah Basin is one of the top runs in the High Sierras. This route is entirely off-trail. Some downhill scrambles are very steep, but after most snow has melted, it is possible to pick a route that requires no rock climbing skills.
I recommend starting from the Colby Pass side to avoid climbing up the steep scree on the west side of the Pyra-Queen Col.

About 0.5 miles above Rockslide Lake look for the easiest way up the slopes on the south side of the river. Cross and work your way up, swinging to the left to go around the slight ridge. You want to reach the slope below the northeast side of the lowest Picket lake. Spectacular views up Tyndall Creek towards the main crest of the Sierras.

At the top, there is an almost level lake basin on Picket Creek. I was able to walk across a strange surface of large (15-30 foot), flat rocks with narrow channels of water between the blocks. Head southeast until you see the low gap leading to the Kaweah Basin. With late afternoon or evening sunlight, the view from the top towards the Red Spur is exceptional. Kaweah Basin Creek below has carved narrow channels. Search for a spot where the crossing is not difficult.

It is an easy but spectacular walk from there up the basin towards the Kaweah Peaks Ridge. It is usually better to stay near the trees to minimize the talus. From farther up, taking a direct route towards the Pyra-Queen Col leads to lot of talus. It's probably better to take the lower route just above the large lakes below the Second Kaweah. Then head up the draw directly towards the Kaweah Queen. Eventually, you'll turn left onto a shelf that leads to the col.

From the col, run down the very steep, narrow draw. If there is no snow, you'll be sliding down the scree. It is easier with patches of snow, but only if you have an ice-axe and crampons. Without equipment, trying to go down the snow would be very dangerous. There is no way to avoid the talus going around Lake 11682, unless you can walk on snow.

From the west end of the Lake, look back towards the col. On a clear day, with an afternoon sun, it is like another world--with the dark cliffs of the Black Kaweah, the reds of the other Kaweah's, the incredibly dark blue sky, and almost no vegetation.

From there, run west to the lowest point on ridge. Pass the small lake at the top and find your way down the steep slopes to the High Sierra Trail. Pick the route carefully to avoid cliffs of 20 or more feet. 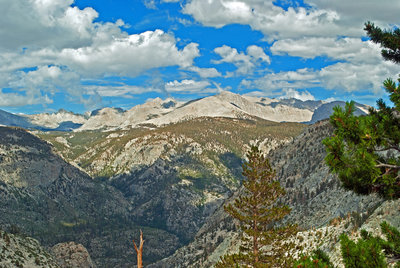