“The 12k and 25k Course for the Spitfire Ultra Race held on the North Menan Butte. ” This is a BLM managed area that is open year round but with restrictions. Stay on the trail/path/road and adhere to private property signage. Please do not cut the switchbacks. There is a vast array of plants that get trampled when people go off trail.

One of the most unique races awaits you on the North Menan Butte. That makes the Spitfire Ultra Trail Challenge one of the most unique trail races you'll ever find. The race is held annually in the middle of April. Race details, along with registration, can be found at the buttingeartrailrunning.com/">Race Website.

If you do not like elevation gain, stick to the flat highway that circles the Butte. The Menan Butte run will burn your quads and make your calves scream with joy as they pound this fantastic geological formation. Prepare for amazing views and a fun time.

This is varied terrain that ranges from soft sand to solid volcanic rock. Solid trail shoes are suggested. Traction is not a major problem but you'll want good ankle support and something with a large mid-sole or rock plate.

The North Menan Butte (also known as "R Mountain") can get very windy being exposed as it protrudes out of the Snake River Plain. Fortunately, Idaho wind typically blows from the south or occasionally from the north. The exposed sections where you'll be challenged with wind you are heading east or west so you only have a side wind to deal with. Beware of afternoon thunderstorms. There is very little shelter to be found and you do not want to play the lightning rod game.

This is a heavily-used trail by hikers, runners, and college students from the close-by town of Rexburg. Pre-dawn runs are always the best to avoid traffic.

Watch your footing, the more tired you get the easier it is to trip and tumble. There are very few spots you can safely do that on this course. With all the other racers on the course, it will be easy to lose focus on the downhill sections. Even the road on the north section has some tricky rocks to manage. In short; watch your feet.

This run offers breathtaking views of the Snake River, the Snake River plains, the Grand Teton Mountain Range and other notable South East Idaho landmarks. Time your run properly and you can crest the western rim with a view of the sun rising behind the Grand Teton in the distance. There are two parking lots and trailheads. One on the east side and the larger more popular lot with bathrooms on the west side.

Starting off, you'll leave the parking lot heading east and start climbing up a gravel path that turns sandy when it starts to angle to the south. The soft sand is left behind as you begin to hit switchbacks on mostly solid rock that has some debris on it. There are a few sections that are not runnable because they are so steep. Within the first mile, you'll find the first one as you approach the top of the western rim and a majestic eastern view. It is OK to walk, everyone else will be.

Keep going over the rocky rim until you hit the trail that circles the entire volcano. Take a left (north) and follow the path until you get to the middle point of the rim. You'll see a trail that runs to the right (east) down into and through the middle (the bowl) of the Butte.

After a steep descent, you'll find the only flat section of the trail. It doesn't last long as you breeze by the sagebrush and quickly start to climb back up the eastern shallow rim and out of the bowl. Before reaching the rim, the trail will split, take the one "less traveled" to the right (southward) and it will take you to the south rim.

This southern rim section is reminiscent of southern Utah and seems completely out of place for Idaho. As you scramble up Idaho's very own "slickrock" you'll be heading back to the west. This is another section that is not completely runnable.

Following the path, you'll have made a complete circle as you approach the top of the western rim and where you first climbed up. Follow your tracks along the western rim back to the middle of the volcano and once again take a right back down into the bowl and the middle volcano trail.

Approaching the eastern rim again, you'll take the trail to the left (north) this second time. Follow that trail along the eastern rim as it turns into the northern rim and up to the radio towers. The trail turns into a rough road and follows the road as it breaks to the right (north) and down to a gate. There is an opening to the left of the gate for pedestrians you can pass through. Do not mistake this gate for a "steeple" and attempt to launch yourself over it. That's a different kind of race.

As you continue, the road works its way around the volcano to the south a bit until it breaks away from below the east rim and heads east to private land. Turn around at the privately marked gate and head back up the road. None but the most fit will be able to run this entirely without walking.

Once to the top of the road, take a right (west) onto the singletrack and through the volcanic formations. This section holds the most prominent volcanic formations. Don't trip! Work your way west and then south along the rim until you reach the section you first climbed up. Head back down the steep rock section your legs loved being introduced to during the first mile. Watch your footing, lava rock is the natural "cheese grater" of the geological world.

After the switchbacks, you'll hit the heaven-sent sand as you rapidly descend back to the parking lot and the finish line. If you are doing the 25k you'll need to re-fuel and then start all over for round two.

Deer frequent the area, especially pre-dawn, so when you see lit up eyes staring back at you in the dark it's probably a herd coming to check out the trail runners in the area. We are a spectacle to behold after all.
Rabbits, lizards and skunks can be seen and/or smelt. You may chance upon a snake or tick. There is plenty of sagebrush, especially down in the middle of the bowl. Beware of getting off path and kicking some cacti.

The Spitfire Ultra Trail Challenge in Menan, Idaho takes place on a dormant volcano. Seated in the heart of the Snake River plain, the Menan Buttes are two of the world's largest tuff cones – volcanoes formed when basaltic magma boils up through ground water. The Spitfire is run on the north butte which is designated as a National Natural Landmark (NNL), Research Natural Area (RNA) and an Area of Critical Concern (ACEC) because of its unique geological features. The designations allow you to enjoy the geologic beauty, in its healthy, natural condition. 2017 marks the 11th Annual Spitfire Ultra Trail Challenge on the Menan Butte Trail. 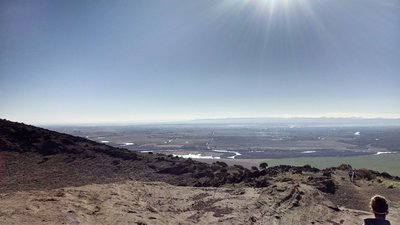 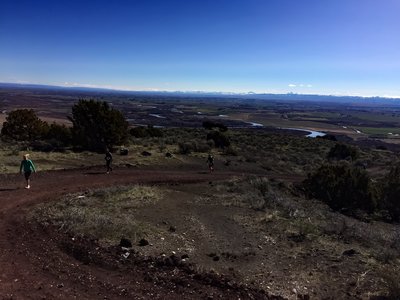 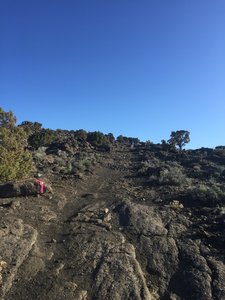 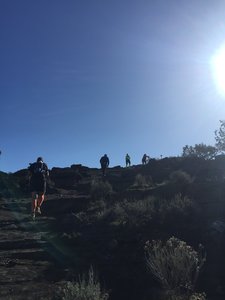 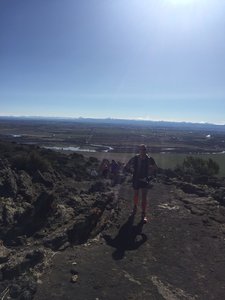 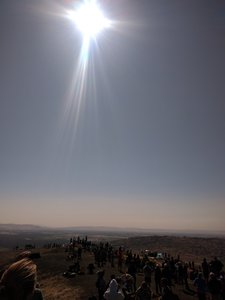