One of the wettest places in Victoria, Melba Gully plays host to dense rainforest, beautiful waterfalls, and robust logging history.

If you're interested in seeing the famous glow worms that reside here, show up after dark with a torch.

This loop run takes visitors deep into a realm of ancient, moss-covered trees and immense fern gullies. The track begins at the large picnic area and heads clockwise around the gully.

After a few bends and a slight uphill, the track presents a worthwhile detour. This added loop brings you to Anne's cascades, one of the more peaceful waterfalls in this area.

From Anne's cascades, continue around the track clockwise as it brings you to the site of the Big Tree; a massive old Otway Messmate, which has fallen and become a nurse log. This log now feeds new life and growth.

From the Big Tree, the track brings runners back to the open picnic area and their car.

Myrtle Beech, Blackwood, and massive Tree-ferns. The area is home to many nocturnal animals including possums, swamp wallabies, spot-tailed quolls, and native bush rats. There are also many bird species to be found here. These are comprise of the Australian Ground Thrush, Superb Fairy-wrens, Yellow Robins, Grey Shrike-thrushes, and Rufous Fantails.

Lastly, and perhaps most interestingly, this region is also home to glow worms and the carnivorous Otway Black Snail.

Settlers began clearing the forest in the 1880's. Due to the hilly terrain and incredibly dense forest, transport was a serious problem for these logging operations. To solve this, a narrow gauge railway was built from Colac to Beech Forest in 1902, and then to Crowes in 1911.

Sawmills were established in the forest and timber tramways were built to carry timber our of the gully. At its peak, there were two sawmills and one tramway in Melba Gully.

The property was sold in 1958 to Mr. and Mrs. Axel Madsen, who generously donated it to the Victorian Conservation Trust in 1975. The Trust later transferred ownership to the Crown to be managed by Parks Victoria in 2003. 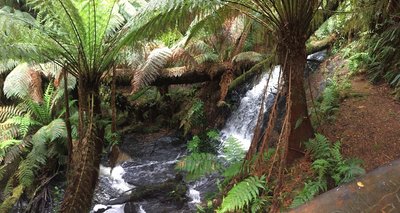