“A right of passage for many hardcore runners in the Valley of the Sun. ”

While it may be considered an unspoken rule in the local running community, completing the Superstition Ridgeline ushers runners into the ranks of Phoenix's running elite. In all seriousness, though, Superstition Ridgeline is easily one of the toughest, if not the toughest run in Phoenix, and as such should only be attempted by physically fit individuals with an aptitude for suffering.

Suffering and glory aside, there is a reason that people attempt this grueling trek: While the route may be punishing, it rewards runners with the summit of Superstition Peak and easily the best panoramic views anywhere in the Valley of the Sun.

Strap on your boots, fill up your water bottles, and get ready for a run you'll surely never forget.

Sturdy boots or trail shoes are 100% necessary to navigate the craggy volcanic outcrops sprinkled throughout this run.

This route is best done in either spring or fall, as the intense heat of a Phoenix summer coupled with the complete lack of shade along the way can spell disaster for even the most seasoned desert runner. If you must run during the summer, bring at least 1 gallon of water per person on your journey. During the spring and fall, you can get away with 3 liters per person, but do you really want to be stuck high on a ridgeline, far from the car, without enough water?

During the beginning and end of the run, as you ascend and descend the ridgeline, respectively, it is near impossible to run. However, if you're okay with scrambly-sections bookending your run, running the ridgetop itself is totally doable and can provide you with one of the most scenic days you might ever have in the Phoenix area.

First off, in order to complete the run you must first place a shuttle vehicle in the Carney Springs Road Parking Area, located off Peralta Road. For those who wish to shuttle with a bicycle, know that the ride back to your car at Lost Dutchman State Park is nearly an hour and a half long, and that there is no great place to lock up your bike at the Carney Springs Road Parking Area.

After dropping your shuttle vehicle at the Carney Springs Road Parking Area and making your way to the Siphon Draw Trail #53 Parking Area, begin the trek up the Discovery Interpretive Trail to the Siphon Draw Connector and the Siphon Draw Trail #53. At the beginning, expect to travel through somewhat uninteresting desert terrain before reaching a canyon, where the real fun begins. Now's a good time to triple-check that you have your Ten Essentials, your boots are tight, and that your spirits are good, as this hill will test all of those things.

Beginning up the canyon, follow the trail as it climbs hellaciously, quickly turning into a hands-and-feet scramble for about a half mile. Don't feel pressured to do this section at any record pace, as there is plenty of run to go, and if you get to the top but no longer wish to continue, the only way to your car is back down the way you came. Blind foot placements make it certainly harder to do coming down than going up.

After slogging your way up the rocks for what seems like ages, you'll reach a saddle and a fork in the unimproved trail. From here, Flatiron Viewpoint is only a few hundred feet away and can provide beautiful views of the Phoenix area for those looking to catch their breath and rehydrate. After reaching this point, congratulate yourself knowing that the hardest leg of the trek is over!

When you are ready to continue, follow a worn path southeast from the top of the steep section through a set of two saddles, contouring the hillside as the primitive trail turns north along the hillside for a short while before turning southeast again to follow the ridgetop. Continue on the ridgetop, enjoying fantastic views of the Superstitions to your left and the hustle and bustle of the Phoenix metro to your right. Revel in the fact that there is relatively little elevation gain throughout this section of the run as you swoop through dips and rises in the spiny ridge before you. After about 4.5 miles on the ridgetop, you'll reach the crowning achievement of the run: Superstition Peak.

Scraping the atmosphere at over 5,000 ft, the "church" of Superstition Peak offers its masochistic, sufferfest-enduring parishioners what many have deemed the best view in all of Phoenix. For those who wish to enjoy the peak in its full glory from the summit, simply run off the worn trail to the summit to your right, being sure to keep the boot-worn path below in your sight. From the top, panoramic views offer glimpses into the desolate, craggy, yet stunning peaks of the Superstition Wilderness to the east and the bustling Phoenix metro and Sierra Estrella to the west. To state it again in emphasis, nowhere else in Phoenix can you glean a better panoramic view.

Once you're ready, head back down to the worn path and continue on, following the smooth, dirt tread as it leads you on a generally downhill course across the eastern aspects of many small peaks to a small plateau. On the plateau, navigate your way through intermittent craggy, boulder-strewn sections before following the trail down a steep ravine to the valley below. Upon reaching what looks like a circular dirt parking lot at the end of the singletrack path, continue south down the dirt road for 0.6 miles to reach the Carney Springs Road Parking Area and the end of your journey. 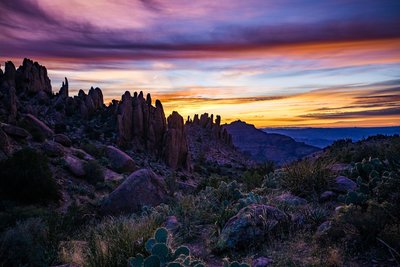 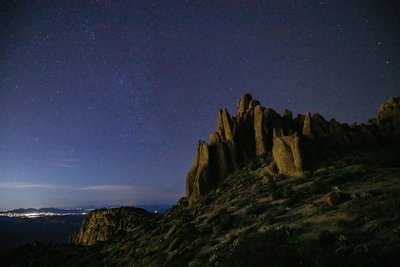 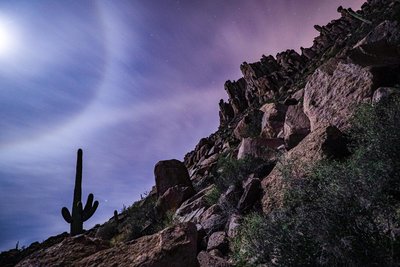 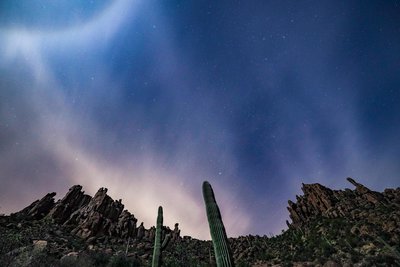 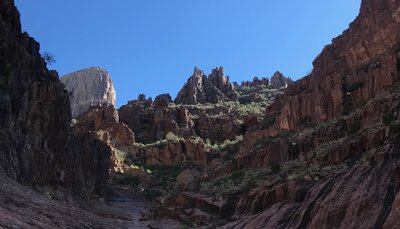 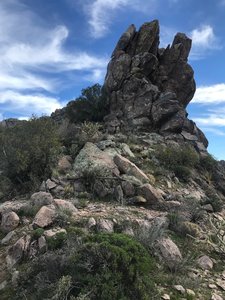