“Douglas Trail takes you to the peak of Wildcat Mountain and continues on to Huckleberry Mountain. ”

The lower section of Douglas Trail is accessible almost year round. The access to the middle trailhead can be blocked by snow in winter months. There are few creeks on this long trail, so bring plenty of water. The lower part of the trail gets much less maintenance than the upper part. Trailhead and directional signing are subject to vandalism in this area, so bring a good map (Wildcat and Cherryville topo maps) or use the Trail Run Project mobile app.

There are a couple of ways to access the Douglas Trail: one on the far west end of the trail east of the community of George just down from the Eagle Creek Trail #501; and the other trailhead mid-way along the trail off of Wildcat Mountain Road requiring use of a short Douglas Tie Trail that brings you to an old rock quarry. There have been numerous changes to the Douglas Trail and access over the last 10 years. If accessing the trail from the west, drive east on SE George Road and turn right onto SE Harvey Road which then makes a hard left heading north before heading northeast again. There are many logging roads along the way to make it confusing in places. There is trailhead parking near the end of Harvey Road. Once on the Eagle Creek Trail, run just over a 1/2 mile to the Douglas Trail intersection on your right (north).

The trail starts with a series of 6 switchbacks and then along a traverse upslope until about mile 1.5 when the trail comes to an old closed Forest Road #255. Follow the road for about 1/2 mile until it drops down off the hill to your right. Then the trail follows along the lip of the canyon with occasional views into Eagle Creek Canyon below until it comes to a large rock quarry. This rock quarry used to be trailhead parking for the east half of Douglas Trail, but target shooting and dumping made it unsafe. The Forest Service closed it and volunteers helped build a 1/2 mile Douglas Tie Trail for alternative trailhead parking.

For a shorter run up to Wildcat Mountain, park at this trailhead off of Wildcat Road (FR 3626). Turn right on Forest Road 3626-105 to the trailhead. Run the 1/2 mile Douglas Tie Trail to the rock quarry skirting the far right (west) of the quarry, and you'll pass the intersection with the lower part of Douglas Trail. Turn left (east) at that intersection and climb along the lip of the canyon with stellar views south including Mt. Jefferson.

The trail heads into the woods and starts climbing to the peak of Wildcat Mountain. Soon, you pass the intersection with the McIntyre Trail #782 on your left (north). Continue climbing to the top of Wildcat Mountain and run a short trail off to the right to check out the remnants of the old fire lookout. It offers views of Mt. Hood and Mt. Adams although the surrounding forest is reclaiming the mountaintop. The trail then drops slightly before it climbs towards the ridge of Huckleberry Mountain and ends at the intersection with the Plaza Trail #783.

The Douglas Trail ranges from low elevation Douglas fir second growth forests with western hemlock and western red cedar, to over 4000 feet where you find mountain hemlock, noble, and silver fir. Understory ranges from Oregon grape, salal, thimble and salmon berry, and red huckleberry to lots of rhododendron and bear grass in the higher elevations that make for great photos in early summer. 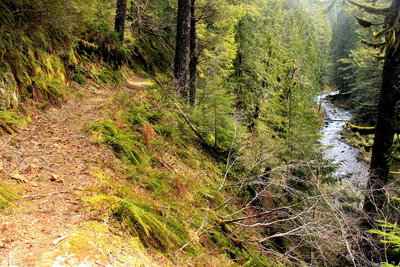 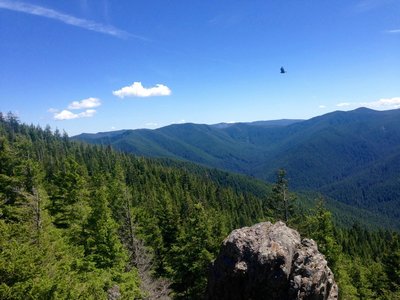 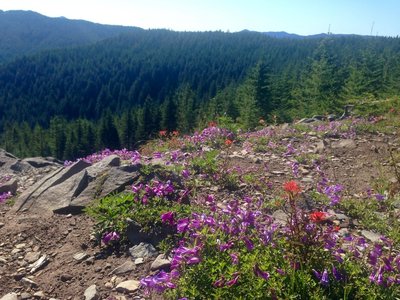 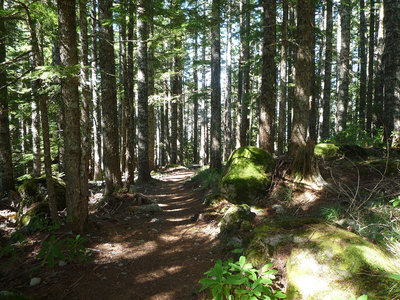 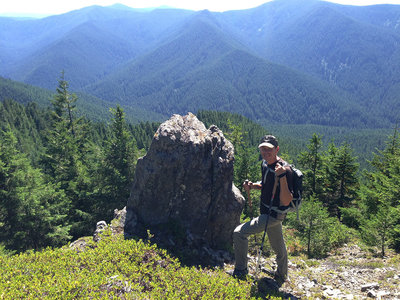