“This 15 mile ridge trail begins from the Kancamagus Highway and ends at the bottom of Cannon Mountain by I-93. ” During the winter months, the section of the Kinsman Ridge Trail between Kinsman Pond and Cannon Mountain can be quite difficult to follow due to few trail blazes and many downed trees.

This makes for an incredibly brutal trail run. Before you attempt it, be sure that you're prepared for almost 6k feet of elevation gain and serious mileage to boot!

A good portion of the Kinsman Ridge Trail is along the Appalachian Trail. Climbing moderately from the Kancamagus Highway, you reach the small peak of Mount Wolf (3500 ft) after about 4 miles. This first part of the trail brings moderate-to-difficult grades ranging from 2-30%. From the top of Mount Wolf, prepare to descend just under 1000 feet through beautiful dense woodlands. Roughly 2.8 miles later, the trail reaches the Eliza Brook Shelter. After reaching the shelter, get ready for a shockingly steep ascent up to the South Peak of Kinsman Mountain. The South Peak is exposed and has great views of the Franconia Ridge, Moosilauke, and Vermont on clear days.

Following the trail down the side of the South Peak, you enter a wooded area that winds along the side of the North Peak of Kinsman Mountain, which is roughly 65 feet smaller than its sister. The ascent up to the North Peak is moderately steep, both up and then down toward the Kinsman Pond Shelter. From the top of the North Peak, there is a pronounced rock ledge that faces Franconia Ridge, offering an excellent view of Lafayette, Lincoln, Liberty, and Flume.

After descending and reaching the trail juncture, the Appalachian Trail continues along the Fishin' Jimmy Trail while the Kinsman Ridge Trail continues north toward Cannon Mountain. This section of the trail is densely wooded at times, and in the winter it's filled with snow and tough patches. The traverse begins with a steep ascent up to a 3,812 foot nameless peak, which is highly windblown and contains many downed trees. The trail then descends steady grades, dropping roughly 300 vertical feet and continues in a narrow fashion.

The Kinsman Ridge Trail continues through more wooded areas and traverses across the Cannon Balls toward Cannon Mountain. The trail reaches a low point at 3288 feet before continuing up a very steep grade until merging with the Lonesome Lake Trail at 3,750 feet. The trail then drops 300 vertical feet to the base of Cannon Mountain, where it climbs at extreme grades (reaching 60% at times) until hitting the juncture with the Hi-Cannon Trail.

From here the summit of Cannon Mountain is just 0.4 miles, at which point you can climb a tower that offers you an amazing, 360-degree view of the surrounding area. Just below the tower is the summit lift for Cannon Mountain Ski Area and the Aerial Tramway Station.

From here, the trail descends on the other side of Cannon Mountain, along the path for the Aerial Tramway, to reach the southbound side of I-93 and the trail's end.

Experience this area in the autumn to see its hardwood forests erupt in fiery fall color. 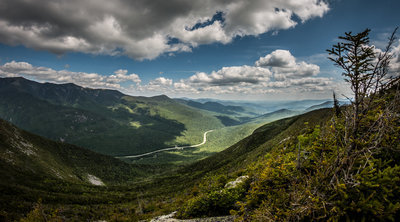 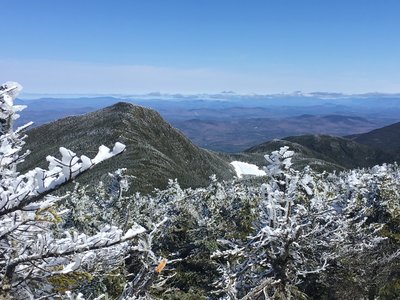 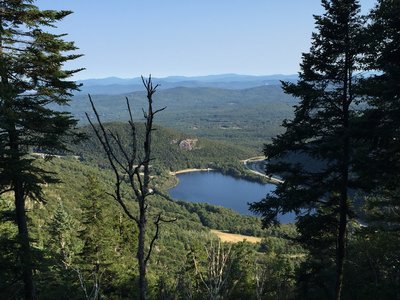 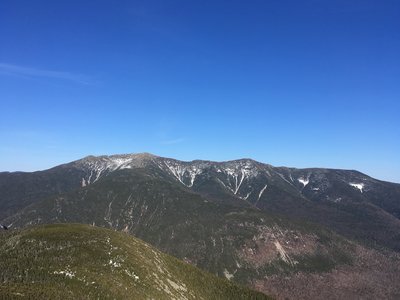 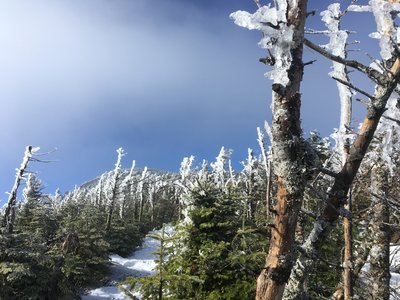 Beaver Brook Out and Back