“A fun, twisting loop through a wooded park along the Puget Sound. ”

A signed posted at the entrance of Seahurst Park states that its hours are 8:00 am to 8:30 pm, but the official website claims 8:00 am to dusk. Whichever is the case, be headed out by sundown, as the city has been known to lock the entrance gate.

Seahurst Park's dirt trails are sporadically maintained, but are usually in reasonable condition. Roots, rocks, and mud are all present though are infrequent enough to not cause any real issue. Trail shoes are a plus but most road shoes would fare well enough. The Service Road, on the other hand, is paved and generally clear of debris.

The park is a popular retreat, especially on afternoons and weekends. While most visitors stay along the beach, expect to share the trails with runners and hikers of all skill levels. Many sections are only wide enough for one person at a time, so pass and be passed carefully.

Cell phone reception is poor to non-existent through most of the forested sections of the park.

Twisting and turning through the protected forest of Seahurst Park, the area's main route (also referred to as the North Nature Trail) is a fun, dynamic run.

The trail is usually accessed via one of two singletracks climbing off of the Shoreline Trail. Head north from the parking lot and look for a break in the vegetation to the right. With no signs or markers, both can be easy to miss. The route as described here begins at the southern point, where it makes a quick, winding climb above the shoreline. The path is mostly smooth, soft dirt. Expect occasional encounters with mud, roots, rocks, and other debris. Most are spread out far enough to not cause any trouble, but a few segments - generally where the plantlife reaches in closer to the trail - can be mildly technical. Use caution in any parts where the trail isn't easily visible.

After the initial climb, Seahurst flattens out until reaching the first of many intersections at the quarter mile point. The entire area is a spaghetti bowl of disused paved road and dirt singletrack, and while the major routes are covered here, there are a few that break off for a few hundred feet before finding their way back. This is a good place to get intentionally lost, as even the furthest detour is no more than a mile from the shoreline. Feel free to explore.

Continuing on, Seahurst resumes climbing for another quarter mile, sometimes at a fairly steep grade. After two crossings of the Seahurst Park Service Road, the main trail reaches its high point about three hundred feet up and stays there, with easy dips and rises becoming the norm. The frequent twists continue, making for an interesting run.

After the second road crossing, the route curves around to the north and comes to a visible split. Left leads to a short connector to the Salmon Creek Ravine trail. Going right heads to a large, lazy circle around the eastern end of the park. The next half mile is a fast series of ups and downs through the mossy surroundings, broken by the occasional mud patch in wet weather. A few diversions split off to other areas and neighborhood trailheads; the main route is generally the most defined one.

Following the South Seahurst Connector, the main trail begins a somewhat steep descent to finish out its last mile. Unlike the first climb, which is interrupted by a flat section, this stays at a consistent grade until reaching the end, making for a strenuous ascent.

Seahurst ends back at the Shoreline Trail, near the Science Center.

Seahurst plant life is typical of the wetlands and forests found along the Puget Sound. Grasses and ferns lie low along the trails, and watch for lilies, huckleberries, salal, snowberries, elderberries. Stinging nettles are an uncommon but present hazard. Tree varieties are dominated by evergreens, with several maples making appearances as well. English Ivy, English Holly, and blackberry bushes are problematic invasive species; feel free to pull out any you encounter along the way to help (though watch for blackberry thorns).

Both large and small birds are present in great numbers around Seahurst. Seagulls, eagles, woodpeckers, herons, and owls can be found here. Landborne animals are less frequently sighted, confined mostly to suburban woodland creatures like raccoons and mice. The creeks in Seahurst were once return routes for spawning salmon, and a hatchery near the Science Center researches their movements. 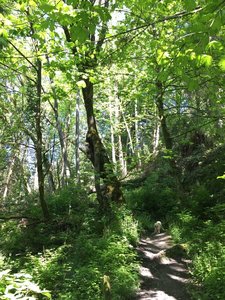 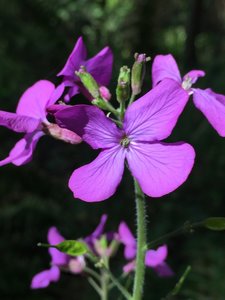 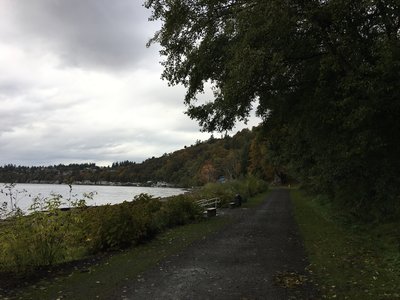