Closed from dusk until dawn.

No shade along this trail. Mosquitos and sand gnats can be harsh in the summer.

Watch for uneven ground and fire ants in the summer.

Being out on this trail can be miserable in the summer. Due to the lack of shade and high humidity, this loop can be a scorcher, but is well worth the scenery if you enjoy wading birds, gators, and/or lily pads. Starting at the gate along the Laurel Hill Wildlife Drive, head north along the western most edge of the canal. Watch for snakes and gators in the canal and along the trail as you go, especially if it has not been mowed.

Head straight for 1.5 miles until you hit the next gate at the other end of the wildlife drive. Head right and immediately hit the other side of the canal. Head through that gate and head down the mirrored edge of the canal until you come back to the start.

Remember to pick of the ticks and fire ants when you are finished. There is a decent porta john about 50 yards to the east of the end of the trail if needed. Parking is available at the kiosk near the beginning of the wildlife drive as well as near the porta john.

Bird watching is prevalent along this trail. Alligators, snakes, and turtles are plentiful in the canal.

Framed massive live oak trees, this was a home site on Laurel Hill Plantation before the Civil War. This canal runs through what was once Laurel Hill Plantation, a nearly 400 acre farm that belonged to several owners during the years of rice cultivation in the Savannah area (1750-1860). The most prominent owner was Daniel Heyward (1810-1888). He was a nephew of Thomas Heyward Jr., a signer of the Declaration of Independence, and of Nathaniel Heyward, the greatest rice planter of his day, who once owned 10 South Carolina plantations and 2,000 slaves.
Laurel Hill is bordered by the Little Back River, which is a channel of the Savannah River. Rice was grown in fields that were flooded with fresh water from the river. In, 1825, the plantation had a house, rice mill, winnowing house, barns, and dwellings for 150 slaves. 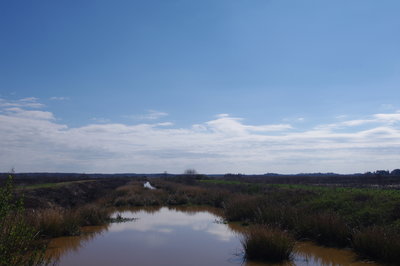 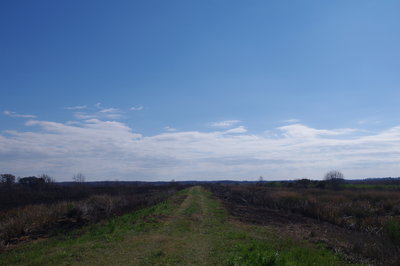