“Juniper gives way to sagebrush in this wide-open country. Watch for wild horses! ”

**Please read and understand this disclaimer before running the Oregon Desert Trail.**

This treeless segment gains elevation from the desert floor east of Christmas Valley (about 4,500 feet) to the north end of Diablo Rim (5,300 feet) with plenty of drops and climbs in between. Early in the section, the trail follows two-track roads that passes by water troughs, which may or may not have water in them, depending on the cattle rotation in the area. There are also several cattle/wildlife water holes along the way, but these muddy, often dry pools are not considered reliable water sources.

This is an abbreviated description and only includes references to a few key waypoints (also shown on the map). Section mileages shown here may differ slightly from the ODT guidebook. A full description of the route can be found in the Oregon Desert Trail Guidebook

For more info and to download ALL of the waypoints for the ODT, visit ONDA.org

Several cattle/wildlife water holes are along the way, but these muddy, often dry pools are not considered reliable water. This section combines a series of cross country, and 2-track road running.

The ODT leaves the Christmas Valley Highway south on a dirt two-track road along a barbed wire fence line. The trail climbs gently up a hill to an unreliable red water tank and water trough (WB003), then drops down a slope to a fenced-off area at a questionable water source: Midway Well (WB004). During the inventory, there was a full water trough, but it is hard to say if this will be consistent.

After passing through the barbed wire fence gates at Midway Well, the ODT hits a two-track junction, and takes the two-track road heading northwest, crossing under a power line (the trail will cross under this transmission line again later in the Coyote Hills). Beyond the power line, the ODT reaches a fork in the two-track road (WB008, questionable water in water trough), and takes the left (southwest) track as it climbs gently toward the ridgelines in the distance.

The ODT stays right (southwest) at the fork and crosses simultaneously over a cattle guard and under a different power line at WB010 (two water troughs here, questionable water), taking the right (south) fork in the two-track roadnot the west-east power line road. The ODT stays on this two-track road as it heads generally southeast toward the more prominent ridges in the distance, passing a questionable water trough at WB011 and WB012. Avoid taking any lesser roads that branch off. Where the two-track road starts climbing the slope to the west at WB015, the ODT leaves the two-track and continues cross-country 9.2 miles in a southwest direction towards the low point between two rock rims.

The trail then drops downhill to the west from the notch, passing a rough two-track north of the Handy Waterhole (WB024 unreliable cow-water hole), then curves southwest and continues gently climbing again to a short, steep climb to a curious rock cairn perched on the next major ridge. Views here are vast! The ODT continues south on this ridgeline until reaching a barbed wire fence, then turns west to follow this fence on a steep descent. At the bottom of the slope where the fence turns southwest, the ODT continues northwest cross-country for about a mile, then turns west-southwest and drops farther to cross an overgrown two-track road. Shortly after crossing this old road the ODT joins another two-track road at WB030 and follows this to the northwest to County Waterhole No. 15 (WB031, unreliable muddy cow water hole). From here the ODT continues northwest on a rough two-track (actually turning into a singletrack cow trail) past another low spot and on to County Waterhole No. 9 (WB033, unreliable cow-water hole).

The trail remains on this overgrown two-track as it continues north towards the reddish Bunker Hill, gradually climbing and turning west as it passes the south end of the hill (WB034). The ODT stays on this two-track road as it leads northwest, past a barbed wire fence just south of County Waterhole No. 7 (unreliable, cow-water hole), to WB035 where the trail heads cross-country 1.1 miles downhill to the west-northwest to meet back up with the two-track at WB036, near the south end of Coffeepot Basin. Here the ODT follows this two-track road west, then southwest as it climbs up a canyon, the beginning of the climb toward Diablo Peak. At a fork in the two-track, the ODT continues on the left (south) track, climbing on the two-track road to the end of this section. 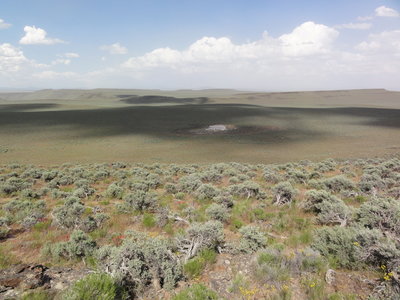