“A nice loop around Garnet Hill with great views of remote sections of the Yellowstone River. ”

Good early-in-the-season run, but can be quite hot in August.

The trail begins and ends at the parking area adjacent to the Tower Junction gas station. The 8.6-mile loop circumnavigates Garnet Hill, but does not climb it.

Run past the gas station and Tower Ranger Station to avoid fording Lost Creek. Cross the highway and follow a two-track another 40 yards, then turn left on the Garnet Hill Trail. The trail parallels the Stagecoach Road Trail for 1.2 miles heading over a small hill before rejoining it at Yancey’s Hole. Many runners prefer following the easier stage road across the open meadows.

Regardless of the route, you soon reach Yancey’s (site of nightly stagecoach cookouts). Here in 1884 John Yancey built his Pleasant Valley Hotel, a small establishment with Pullman-style beds. Patrons had to bribe the maid for clean sheets. But "Uncle John" made everyone feel at home. There was always some activity at the adjoining saloon. John served "Kentucky tea" from two shot glasses he boasted had never been tainted by a drop of water. But bigger, finer hotels were already in service by 1906 when Yancey’s burned to the ground. Soon automobiles were allowed in the park and the stagecoach era ended.

From Yancey's, our trail follows a singletrack north through a gap in the hills, crossing Elk Creek at the 1.7-mile mark and again at 2 miles. The trail continues along Elk Creek as it drops into an ever-narrowing canyon. The impressive rock face of Garnet Hill lies ahead. Watch for elk along this well-named creek. Garnet Hill was also appropriately named. Its dark rock is 4.5 billion-year-old granitic gneiss, which contains small imperfect red garnets.

At 3.5 miles the trail reaches its lowest point and passes a junction with the Garnet Hill Spur Trail (on left). Runners often take a 1/2-mile side trip to the Yellowstone River, following this spur trail and making a right at its junction with the Hellroaring Creek Trail. At the river an impressive suspension bridge hangs above the mighty Yellowstone as it rushes furiously through a rock gorge. The scenery as you continue on the Garnet Hill Loop Trail is also outstanding as it rolls up and down around the north end of Garnet Hill and affords impressive views of the river.

At 5.1 miles, the trail climbs steeply 400 feet up a shoulder of Garnet Hill and away from the river. At 6.3 miles it reaches the top and continues another 2.3 miles back to the trailhead, passing a junction at 7.6 miles (on the right) and twice crossing the highway before reaching the end.

Chance to see elk, buffalo, coyote, and maybe even a badger. 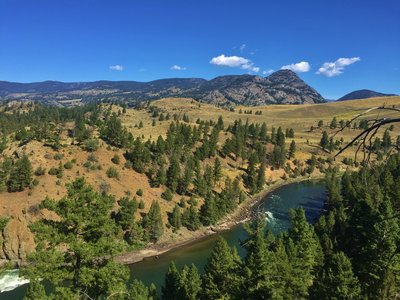 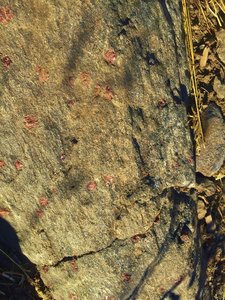