“With Sky Parlor Meadow, Moraine Lake and views of Big Arroyo, this detour to High Sierra Trail should not be missed. ”

I think that the High Sierra Trail should have been routed down the Moraine Lake Trail. This route is far more beautiful and adds only a little over a mile.

The Chagoopa Plateau spreads over 5 to 10 square miles, depending on where you mark the boundaries. It is surrounded by the Kaweahs and the Red Spur to the north, the Big Arroyo on the southwest and the Kern River canyon on the east. The Great Western Divide stretches across the western horizon and the main crest of the Sierras is off in the distance to the east. These surrounding mountains help keep the air clear of the Valley dust and smog; although, crystal clear days are no longer as common as in the past. When the air is clear, the views are extraordinary.

The signed junction with the High Sierra Trail is in the middle of a large meadow beneath Mt. Kaweah. After about ½ mile, the forest becomes more open, and at 0.7 miles, the trail begins to skirt along the edge of the Big Arroyo. Be sure to take advantage of this by climbing short distances to points overlooking the Arroyo and the Great Western Divide. After leaving the Arroyo, the trail passes a couple of small, beautiful meadows and then goes along the northeastern shore of Moraine Lake, one of the gems of the Sierra. This large lake is watered from underneath, instead of having a stream directly flowing in from the high peaks. It is much warmer than other lakes at over 9000 feet and is great for swimming. From the trail side, there is a view over the lake to the Great Western Divide; however, I prefer camping on the southwest side with its view of the Kaweahs and the Red Spur.

Leaving Moraine Lake, the trail passes south of some extraordinarily beautiful little meadows and then passes around the south and east sides of Sky Parlor Meadow. I was spellbound when I first saw this meadow. It was a crystal clear day. I walked out into the meadow and spent at least an hour looking at the surrounding mountains in the distance on all sides. There were two herds of deer along the edges of the meadow.

From the meadow, the trail heads north to a signed junction where it rejoins the High Sierra Trail.

The meadows on the plateau are unusually green and beautiful, possibly because of the relatively flat ground and the metamorphic soil washed down from the Kaweahs. I have seen multiple herds of deer in Sky Parlor Meadow. The largest rattlesnake that I have ever seen (about 8 feet long) was near the south junction with the High Sierra Trail. It was also the only rattlesnake that I have seen above 6000 feet. 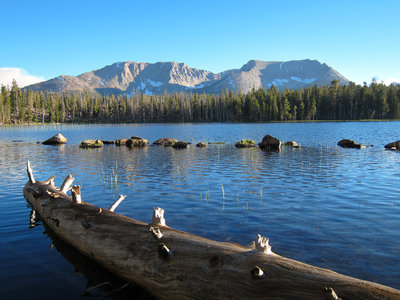 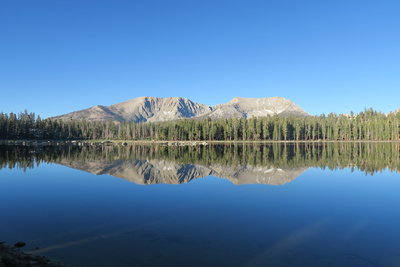 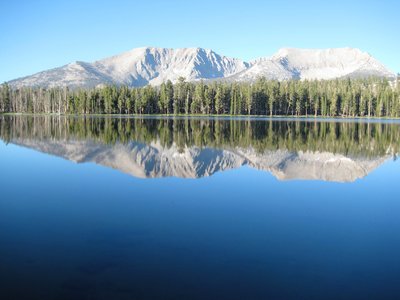 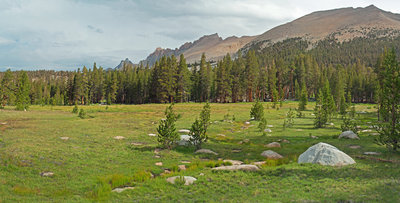