Wilderness permits are required and there are daily quotas. Reservations can be submitted by email or fax starting on March 1 and no later than two weeks prior to the trip. 1/4th of the quota is available on a walk-up basis at the issuing station closest to the trailhead on the day you are starting. Permits are $10, plus a $5-per-person wilderness fee. No campfires above 10,000 feet.

The Big Five Lakes Trail, itself, is not difficult, but reaching it requires a long, strenuous run, no matter which trail or route you take. Little Five Lakes are much better known because they are on Blackrock Pass. The Big Five Lakes are often bypassed as runners loop from from Blackrock Pass to the Lost Canyon or Soda Creek trails. However, the Big Five Lakes basin is among the most beautiful in the Sierras. It should be a prime destination in itself, and you can have your campsite or even the entire basin to yourselves.

Coming down the Lost Canyon Trail, at about 9,600 feet, just after crossing the creek below a gently sloping meadow, you reach the signed junction with the Big Five Lakes Trail. This trail climbs up moderately steep switchbacks through a scattered coniferous forest, then climbs more gradually as it passes a pretty, but shallow pond, and finally climbs again for a total of about 800 feet. Near the top, it is possible to run off-trail a few hundred yards northeast for a overview of almost all of the Big Arroyo, Kaweah Ridge, and Red Spur. From the high point, the trail drops steeply about 400 feet, to pass by Lake 9,830, the lowest of the Big Five Lakes. This is a large, beautiful lake with several good campsites and is the only Big Five Lake where campfires are allowed.

The trail then climbs about 600 feet to a signed junction near the top of the ridge that separates the Big Five and Little Five Lake basins. Continuing straight ahead leads to the Blackrock Pass junction at Little Five Lakes. This trail is the left branch, which drops through the trees less than 200 feet to reach Lake 10,260, the first of four lakes in the main part of the basin.

The basin is surrounded on three sides by high granite ridges. It is wide and fairly level, with less than an 80 feet of elevation difference between any of these four lakes. The first two have trees, rocky peninsulas and good campsites. A branch trail goes along the northeast side of Lake 10,192, the largest lake. Another branch continues 0.7 miles to pass around the north and west sides of Lake 10,214. The final lake is only slightly higher and easy to reach, but it is mostly barren.

From the end of the trail, it is fairly easy to climb to Pass 11,145 at the west end of the basin. However, from there, it is a very steep slide down the scree to Spring Lake. You can then run over to Blackrock Pass heading towards the Timber Gap Trail, or you could climb over Glacier Pass (Class 3) to the Monarch Lake Trail. 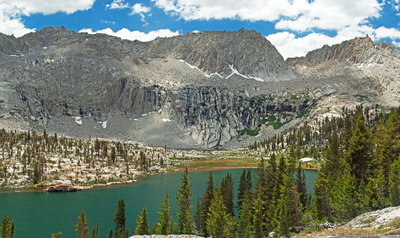 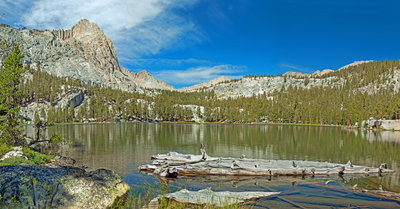