Portions of this trail are steep, narrow, and rocky. Some sections may be covered with weeds, obscuring the trail or making travel difficult.

As it leads away from Backcountry Camp 84, the Jenkins Ridge Trail follows a wide jeep road that soon departs from Haw Gap Branch to follow Sugar Fork. A half-mile above the trailhead, a wide path cuts sharply back to the left, climbing 200 yards to a bare plot of ground known as the Higdon Cemetery. A half-mile past the cemetery, a smaller stream flows in from the left, marking the faint outlines of an abandoned homesite.

The grade stiffens slightly as the trail draws higher into the mountains, eventually curling toward the east side of Pickens Gap at the foot of a crooked ridge that extends from the main Smoky divide at Spence Field. At Pickens Gap, the trail turns sharply right and enters a steep climb on a rough narrow track along a spine. The trail briefly levels, affording runners a break before returning to steeper climbing along the ridgeline to Woodward Knob.

Beyond Woodward Knob, the trail descends considerably, levels momentarily, and then launches a long, steep climb to Cherry Knob. This section of trail is dominated by oaks which provide shade for scattered pockets of flowers. After clearing Cherry Knob in a sharp right-handed turn, the trail drops into a slight gap that anchors the upper end of the Haw Gap Branch as it feeds downslope. The sparse remains of an old log structure can be seen nearby on the flat of the ridge.

After another mile of steep climbing, the trail enters the grassy bald of Haw Gap. During the summer months, the trail through the gap can be difficult to discern because of tall weedy ground cover. The exit from the bald passes a weak stream before entering a moderate descent that is frequently rocky and sporadically encumbered by weeds. As it descends, the trail offers several panoramic glimpses of the high Smoky divide.

Two easy stream crossings precede a drop into the moist environs of Meadow Gap, where the headwaters of Gunna Creek gather. The Gunna Creek crossing signals the start of a long moderate climb angling across the headwall of the Eagle Creek watershed. Here, the trail runs on the southern fringe of a great grassy bald that is steadily receding to encroaching trees and shrubs.

A mile-and-a-half above the Gunna Creek crossing, the Jenkins Ridge Trail emerges from a rhododendron thicket into the openness of Spence Field and immediately terminates into the Appalachian Trail near a fine vantage point. 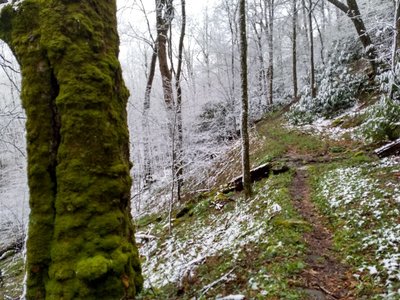 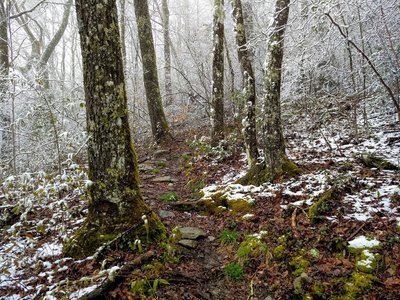 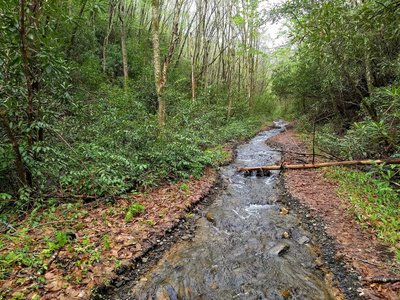 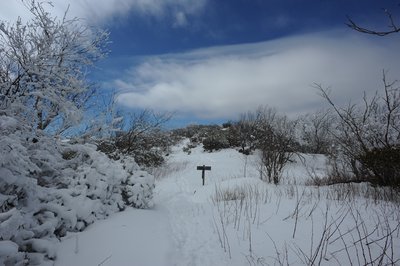