“A narrow climb to Lookout Point, where views of Hetch Hetchy Reservoir, Wapama Falls, and the surrounding hills await. ”

Evergreen Road into Hetch Hetchy can be closed due to snow in the winter or a washout after storms. You can check road conditions at nps.gov/yose/planyourvisit/... or by dialing 1-209-372-0200, dialing extensions 1/1. Chain restrictions may also go into effect at any time in the winter, so bring chains with you. The Hetch Hetchy Road closes in the evenings, so check with the ranger at the entrance station to confirm when the gate will be closed during your visit.

The trail is very rocky and narrow. As the trail is not heavily traveled, the vegetation may grow into the trail, making it difficult to see the obstacles that can be found on the trail.

This trail provides a quiet run through Yosemite with excellent view of lower Tuolumne River canyon and views of the Hetch Hetchy Reservoir. Wapama Falls can be seen from here as well as a 360-degree view of the surrounding hillsides. Due to its location away from the valley, its likely that you'll be the only person on this trail.

The trailhead is accessed by taking the Mather Ranger Station Trail for about .2 miles from the Hetch Hetchy Entrance station. This trail weaves into the National Forest before coming to an intersection with trails that lead to Camp Mather to the right. If you continue straight, the trail leads to Mather Ranger Station; if you go to the left, you find the Lookout Point Trail. As the trail leaves the intersection, it begins to work its way back toward Hetch Hetchy Road and approaches the Yosemite NP boundary. The road is never far from the trail.

The trail passes through a narrow gate and you re-enter Yosemite. The trail is very narrow and rocky through this section and can be overgrown in sections as it is not heavily traveled. It requires you to watch your footing as there are loose rocks along the trail. Approaching the road around .3 miles, the trail cuts back to the right before it begins to climb up the gully. Most of this area was burned in a fire in 1996, but the trees are starting to recover. In the spring, water may be flowing in a small creek that descends through the gully, but is dry later in the summer and fall. At the top of the gully, the trail begins to level out as it makes its way toward a fork. If you continue to the right, the trail leads toward Hetch Hetchy Reservoir while the Lookout Trail breaks off to the left at the fork.

The trail follows a narrow path along a seasonal pond before climbing up the rocky hillside to the summit. Swinging around the hill, the trail disappears but you can easily run up the rocks to the summit. Jeffrey pines can be seen as you approach the summit, where a 360-degree view of the area awaits you. In the distance, you can see the Hetch Hetchy Reservoir and the waterfalls that flow into the reservoir. You can see the Tuolumne River canyon and the damage that the Rim Fire (2013) caused. While not as awe-inspiring as other vistas in Yosemite, it is less crowded and provides great views of the area. Once you have taken in the view, you can head back to your car or go back to the fork and continue on toward the reservoir.

In the fall, the deciduous trees that are growing on the hills around the trail are golden as their leaves change color. Many of the evergreen trees were burned during a fire in 1996 and the Rim Fire in 2013, and the area is in the process of recovering. In the spring, wildflowers can be seen along sections of the trail. 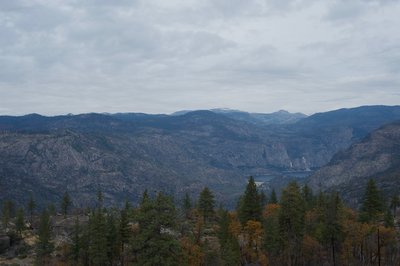 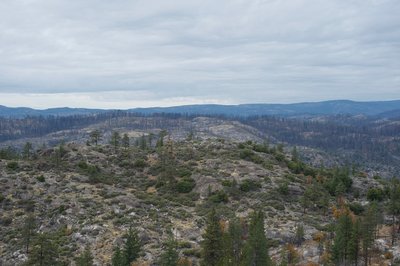 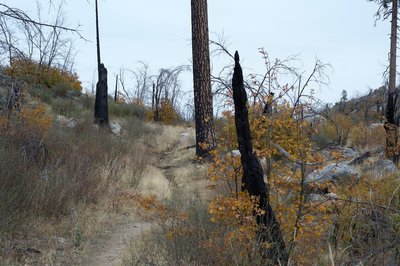 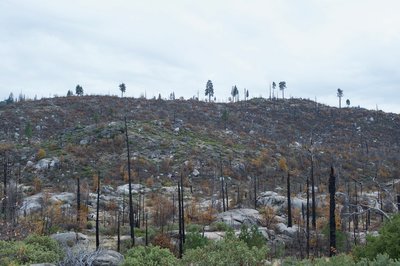 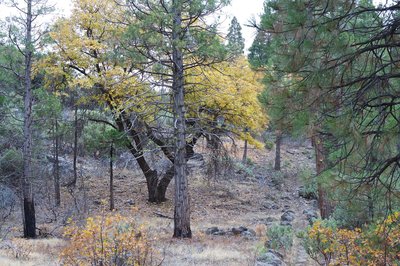