“Follow this one from the river valley to the prairie plateau with many views and solitude. ”

Bring water, especially in the warm months. Watch out for rattlesnakes. The trails can be extremely slippery if wet and difficult to follow due to cattle trails and a lack of markers.

The Long X is seldom used and offers abundant solitude with great views and winding trail through different ecosystems.

Start at the parking lot at the end of the CCC Campground. Go through the gate and at the first trail junction, head to the right to follow the Long X Trail. The trail winds down towards a creek crossing before heading up and back towards the Little Missouri River. Pass through a stand of trees before beginning a steady uphill climb towards the plateau. The trail passes up a narrow valley in the badlands formations before heading up several switchbacks.

Once on top, pass through a gate and try to follow the trail generally to the south. A few gates in barbed wire fences will be crossed and the trail is often part of the ranch two track road, but can be traveled like a singletrack. The herd of cattle may be in the way, and will need to be skirted around. Cross open prairie and a few treed sections before coming to the junction with the Maah Daah Hey at another fence crossing.

The Long X Trail was one of the routes that cattlemen used to move cattle from southern parts of the country to the prairies of modern-day eastern Montana and western North Dakota. The trail was a convenient route across the difficult terrain of the northern Little Missouri Badlands, and it passed through what became the North Unit of Theodore Roosevelt National Park.

In the 1880s, during the time Theodore Roosevelt was involved with cattle ranching operations in the Dakota Territory, cowboys were moving herds of cattle by way of the Long X Trail. Roosevelt himself is not known to have used the Long X Trail to move his cattle. 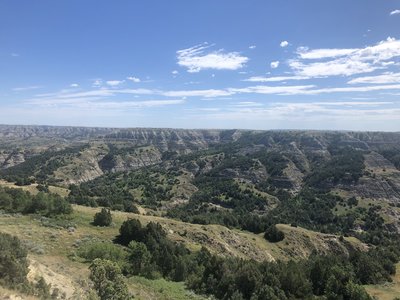