4.2 (62)
Plan with onX Backcountry
Previous Next

“Varied terrain from smooth wide dirt, to rocky singletrack with amazing views in all directions. ” This Route begins near I-70 & Hwy 93 in Matthews/Winters Open Space. You'll have the opportunity to run and take in the sights of Matthews/Winters, Red Rocks Park, and the Dakota Ridge.

Mountain bikes are allowed on the trail, and on downhills the trail often narrows. Make sure to be on the lookout, especially if you have pets with you.

Start on the Village Walk Trail from the Matthew's/Winter's parking lot. A bit less than 0.5mi down the trail stay right at the intersection with the Village Ride (Mtn Bike Only) trail. A little over 1 mile in, you'll reach a second intersection. Stay right to head up the Morrison Slide Trail and begin climbing a much steeper trail than you have been on. You'll top the Morrison Slide around 2 miles, follow the trail as it switchbacks down the south side of Morrison Slide toward Red Rocks Park. Stay right at the next trail intersection (unless you need to turn back and shorten the route), you are now on Red Rocks Trail.

When you arrive at the paved road, you'll be at the intersection of two roads in Red Rocks Park. Look straight across from you to a small roadside parking area, Red Rocks Trail picks back up here. Not much further down the trail, you'll reach another intersection, turn left here and cross the road, the trail picks up on the other side.

When you arrive at another road you'll have to follow the pavement for a few minutes. Turn left onto the road (Red Rock Parks Rd) heading northeast. Follow to Hwy 93 where you'll cross to the far side of the Hwy and head south (right) a short distance to pick up the Dakota Ridge Trail. The trail will take you north as you ascend the rocky ridge.

The next intersection is a paved road, turn right and follow the road down the east side of the ridge. You'll see the Dakota Ridge Trail pick up again on your left-hand side, there are wood railings built along the trail, so you should not miss it. Once back on the single trail follow it back to the crest of the ridge, staying right at an intersection that leads to an overlook (dead end). Stay straight along the Dakota Ridge Trail that follows close to the crest of the ridge. After mile 6, you'll head downhill, eventually making a hard left at a gate onto a wider dirt trail. You'll be able to see a parking lot (Stegosaurus Lot). Follow the wide dirt trail all the way down to Hwy 93. Cross the road and head toward the parking area where you began.

Rattlesnakes can be on and off the trail during certain times of the year. Keep to the trail, do not stray into the grass as they are very hard to see in the grass.

A giant wolf spider has been spotted on this trail. 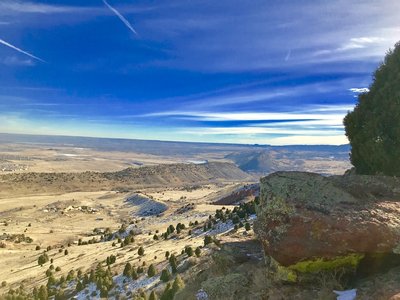 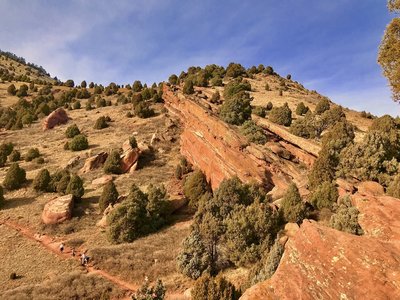 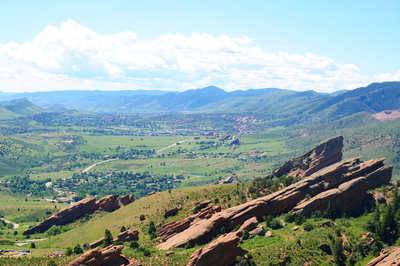 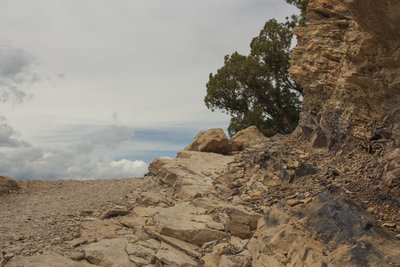 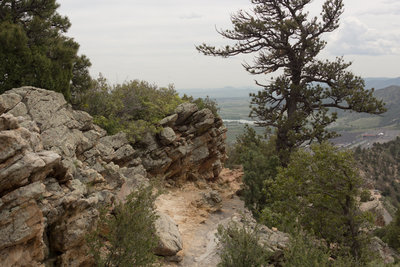 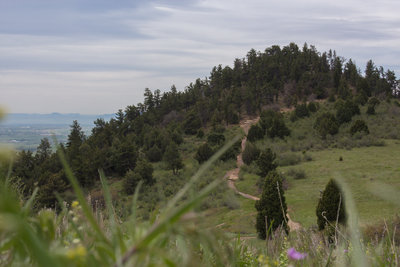 Lair o' the Bear Out and Back