I Trail to PS Trail to T Trail

“Splendid trail with a view of the Little Missouri River and Breaks. ”

Smooth singletrack with a ridge traverse, creek crossings, badlands formations and expansive views of some of North Dakota's best scenery.

Difficult navigation, horses and cattle may detract from your first run.

There are cattle being ranched in the park and runners should try to avoid startling them and causing the cattle to run. Finally, because of the cattle, there are many animal trails that look like the main trail making navigation difficult. Carry a map or use the Trail Run Project mobile app! The cattle tanks have water, but filtration is needed to make it potable.

Watch out for rattlesnakes, cattle and wet trails. When wet, the trail is very slippery due to the bentonite clay. Also, runners must yield the right of way to horse riders and be respectful when approaching from behind to not spook the horses. Carry a map or use the Trail Run Project mobile app to make sure you stay on the correct path instead of following the cattle trails.

Start at the campground and follow the signs for the I Trail to the right. The trail has a steep descent shortly after starting, followed by a steep climb.

At the next trail junction, follow the signs for the PS Trail to the left and wind around the buttes. The trail then separates again, but is difficult to navigate due to a missing marker. The trail heads left across some badlands formation instead of down into the gully to the right.

The trail passes some spectacular petrified wood and climbs up to the top of a long ridge system. The ridge is steep and has drop offs on either side; use caution. Descend until a cattle water trough is reached. Here, the T Trail is reached and either goes north to the Little Missouri River or south. Follow the trail that crosses a small creek to the southwest and climbs into the next drainage to the west.

A fence is reached with another marker for the T Trail that heads to the west around a sharp bend and up to another cattle trough. Again, follow the sign uphill to the T Trail and head southwest. The trail winds around the badlands and cross a large slumping hillside that has a newly repaired trail.

The trail then follows under the rim of the breaks back to the campground passing through trees and typically some muddy trail.

Part of the Little Missouri State Park is leased from landowners that allow the public to use its private land. However, this means that cattle are being actively ranched on some of the areas with trails and caution should be taken to not spook the cattle. 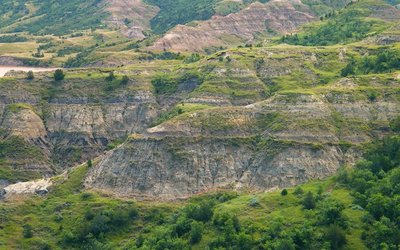