“A wooded trail that follows North Cheyenne Creek with 7 wooden bridges as crossovers. ”

7 Bridges Trail (#622) is open to runners and mountain bikers. No equestrians or motorized vehicles. Camping along the trails is permitted, but not within 300 ft. of the stream. Campfire permits are not required. If you run off trail or swim or dive in streams or lakes, you do so at YOUR OWN RISK. Water from streams should be treated before use. Prevent pollution--keep garbage, litter, and foreign substances out of lakes, streams and other water. (All per USFS)

This is a frequently used trail, particularly after working hours, during holidays, and on weekends.

Ice sticks around longer than most trails due to it getting so packed down.

To get to this trail, park in the lot past Helen Hunt Falls at High Drive and Gold Camp Rd. You'll need to run down Gold Camp Rd. about 0.8 mi to the Seven Bridges Trailhead. It will be off Gold Camp Rd. on the right side. It is not marked as 7 Bridges Trail, but rather Trail #622 and is managed by USFS Pike National Forest.

7 Bridges Trail (#622) follows North Cheyenne Creek and crosses seven wooden bridges within the first mile. The trail offers nice wooded surroundings and rocky terrain that is moderate in difficulty. This is a heavily travelled path,, with both locals and tourists. There are many way paths venturing to the creek and chances for photo ops as the trail winds its way along the lively stream. At the seventh bridge, most foot traffic turns back and makes this an out and back run, although 7 Bridges Trail continues on.

After the seventh bridge, follow the (#622) signpost, and the trail will begin to ascend over large rocks and small boulders. The route at this point requires some scrambling and increases to more advanced in difficulty. After about a 400 foot rise, the trail crosses a boulder field with deep scree. Sure footing is necessary as the trail is scanty and the sides are steep. 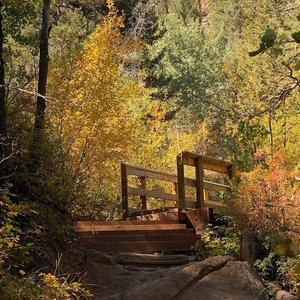 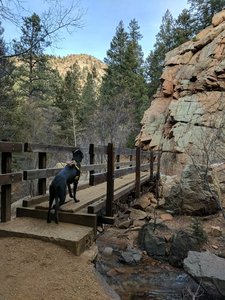 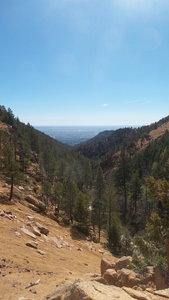 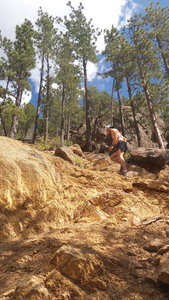 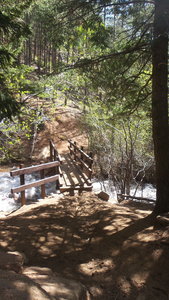 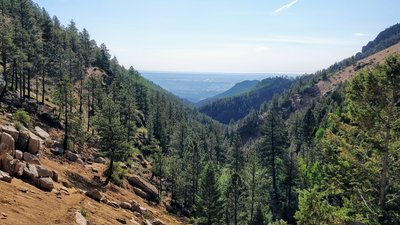 All Clear 37 days ago See History