“A bucket-list run from the rim of the Grand Canyon to the Colorado River and back. ”

This trail starts on the Grand Canyon's southern rim and sends you plummeting into the depths of the 'Big Hole'.

Amazing views are the order of the day.

Beware, however, as this is no easy task. The combination of mileage, elevation gain (and loss), and heat can do a number on even the strongest runner.

This trail is one of the most crowded trails in one of the most popular national parks. Leaving early eliminates most of the masses on the way down and they tend to not venture too far from the rim, so you'll only have to deal with them the last couple of miles on the way up.

The Bright Angel Trail is considered the parks premier trail. It's well maintained, graded for stock, with regular drinking water and covered rest-houses, and is without question the safest trail in Grand Canyon National Park. There is a ranger station located at the trails halfway point (Indian Garden) and one at the bottom of the canyon (Bright Angel Campground). Visitors running for the first time at Grand Canyon often use this trail in conjunction with the South Kaibab Trail. Particularly during hot weather, it makes sense to ascend via the Bright Angel Trail because of potable water, regular shade, emergency phones, and the ranger presence.

There is a cafeteria style eating establishment very close to the trailhead. Eat here for a well-deserved calorie binge after the run.

This is an extremely steep run with occasional Mule Trains. Get a start at sun up to avoid them, otherwise you might get stuck behind them on the narrow stretches.

From a scenic standpoint, this will no doubt be one of the best runs of your life. The view from the rim is impressive, but the scale of the Grand Canyon and the awe it inspires really begins once you descend into its depths.

You'll do that quickly as Bright Angel Trail quickly drops from the rim toward the river that caused this wonder; the Colorado River.

The trail is obvious and there are not many connecting trails. Additionally, the signage is always clear. Simply continue to plummet and remember to enjoy the views.

Around mile four (half way down), the trail begins to flatten as it approaches Indian Gardens. Here there is camping and water. Clearly this is quite the oasis compared to the parched and rocky red earth the trail began on.

After Indian Gardens, the descent begins anew. Follow the trail until you get close to the river. Bright Angel will continue above the river to the right to a bridge that can be taken to complete the Rim-to-Rim-to-Rim epic run. However, for this route, I simply broke off of the trail, found my way to the Colorado River to cool off, enjoy the views, and fear the 6000+ ft climb back to the rim.

Following a natural break in the cliffs formed by the massive Bright Angel Fault, todays Bright Angel Trail approximates a route used for millennia by the many Native American groups that have called the Grand Canyon home. Early western pioneers at the canyon first built a trail in 1891 to reach mining claims established below the rim at Indian Garden. Recognizing that the true worth of the claims would be measured in visitation by tourists, these pioneers immediately registered their trail as a toll road and extended the trail to the river. The mining claims and use of the trail as a toll road would be the source of much controversy, first in legal battles with railroad companies that wanted to control tourism and later with the federal government. The trail was turned over to the National Park Service in 1928. Look for ancient pictograph panels and historic structures, and the trails construction to sense its rich history. 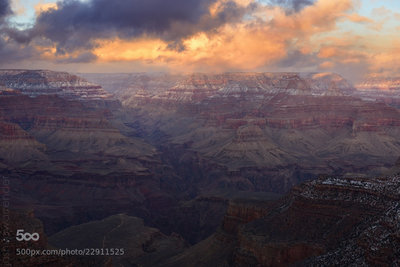 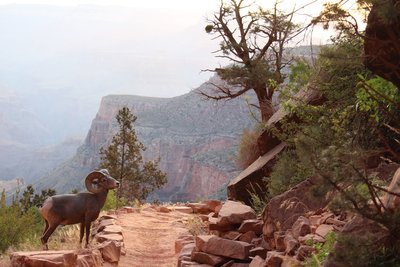 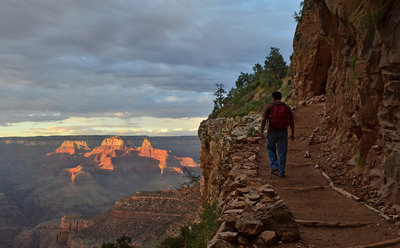 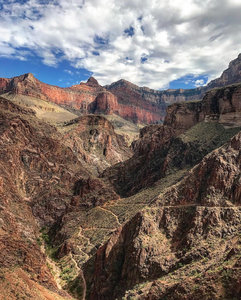 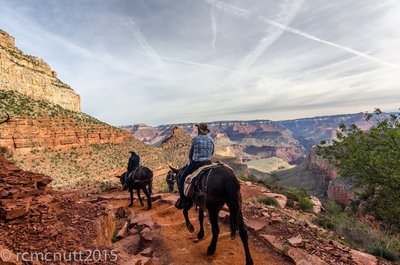 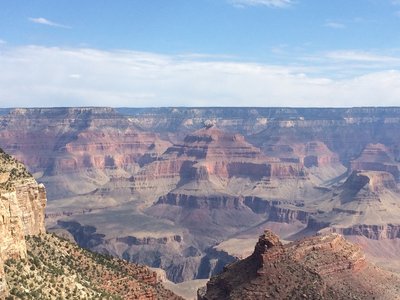