Matterhorn Creek Trailhead is difficult enough to get to in the summer months. During winter and parts of spring, the way is generally closed somewhere along the Henson road, about 10 miles below the trailhead.

Uncompahgre Peak is a favorite for trail runners stopping through Lake City. With a fairly flat, long, and scenic approach, this mountain offers excellent trails before a grueling couple miles up switchbacks to its summit. Due to its length and elevation change, even the fastest runners should expect at least 4 hrs round trip, with about 1.5-2 of them on this trail.

From here it's only about a mile to the summit (but also around 1,500 ft gain). Run up a steep dirt trail, following some switchbacks. These will stay just left of the mesa-like formation of Uncompahgre's summit. Pass through a steep, rocky portion before gaining the south ridge at 13,800 ft.

From here, the trail disappears behind the ridge, hugging Uncompahgre's west side. Come to about 200 ft of class 2+ rock, the crux of the run. After making it through this loose, steep section, come to a flat area just below the summit. There may be multiple trail segments here, but they all lead to the same place. Pick a path, angle up toward the right past the final 100 ft of gain, and reach the top. Uncompahgre has a unique, flat summit, similar to but even larger than Longs Peak's football-field-like table top.

From here, you may head back to Matterhorn Creek or, if time permits, head back to the junction to run Wetterhorn Peak (it is recommended this double be done with Wetterhorn first - it's closer to the trailhead, so you're more likely to summit at least one peak should bad weather hit).

This is truly one of the most scenic 14ers in Colorado. The pika and marmots seem to agree, as they are inquisitive enough to wander right up to even large groups of runners. The valleys here are full of wildflowers while mountain goats and bighorn sheep seem to stay away for the most part. 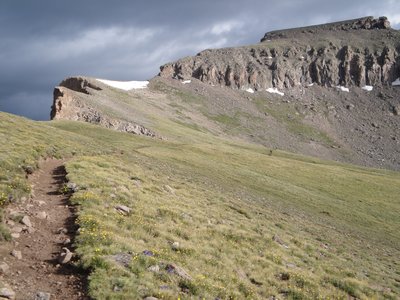 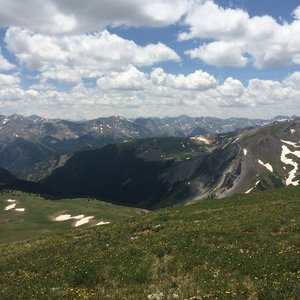 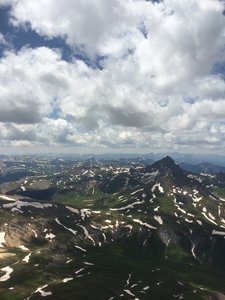 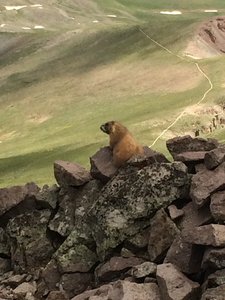