“An isolated feeling pervades this wonderfully forested peninsula of land into the Grand Canyon. ”

This huge and remote chunk of plateau land is surrounded on all sides by the depths of the Grand Canyon and is reached via a thin neck of land connecting it to the north rim. Exploring the entire plateau would take days, but this trail will give a sampling of what is on offer.

Start from Swamp Point where the Powell Plateau Trail forks from the North Bass Trail. After the initial North Bass switchbacks, Powell Point Trail begins straight ahead (southwest) and the North Bass Trail turns sharply left (east). Before heading up to the plateau, it is worth poking around the NPS ranger cabin. Although it is also called Teddy's Cabin, Theodore Roosevelt never stayed here!

Start climbing switchbacks up to the plateau, leaving the Muav Saddle behind. You should still be able to see evidence of the wildfires that burned in this area as recently as 1989. After a few steep sections, the grade becomes more constant and before long you're among pines that signal the plateau. Once on the plateau, the trail is almost completely flat.

Turn south and trace the edge of the plateau, running through a lovely forest of ponderosa pines and wildflowers. Depending on your destination, the trail often becomes faint, but careful route finding allows users to reach as far as Dutton Canyon. There are a few cairns and markers on trees but expect to lose the way eventually. Most people stop once the trail runs out and retrace their steps back to the trailhead. An adventurous and worthwhile goal is to persevere to Dutton Point which is the only overlook on the plateau to get views of the Colorado River. This is also one of the locations used to create the famous "Chasm of the Colorado" composite painting which used to hang in the US Senate. To reach Dutton Point, you'll have to bushwhack across a few ravines choked by prickly brush. (Note: be sure your navigation skills and water supplies are up to this added excursion)

Historical notes: the Anasazi lived on this plateau during the 11th and 12th centuries. In 1870 the explorer John Wesley Powell visited and the plateau was named for him. Teddy Roosevelt and others hunted mountain lions for sport here. Dutton Point and Dutton Canyon are named after the geologist Clarence Dutton. 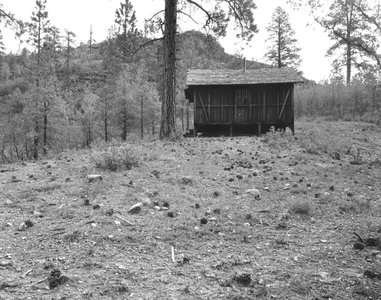