“Five-star scenery on a singletrack loop at the head of Sycamore Canyon. ” Anyone looking for a run on smooth singletrack should look elsewhere. This route is continuously rocky with moderate technical difficulty.

Fairly rocky in many places.

The Sycamore Rim loop has numerous access points and can be enjoyably traveled in either direction. This description uses the main trailhead designated by the Kaibab National Forest and proceeds clockwise. The entire route is well signed and cairned, with minimal route-finding needed.

The first segment of trail travels through open meadows and pine forest past a number of historical sites. The forest service has posted informative signs at a number of places describing things like the 1863 Overland Trail (which connected Flagstaff to Prescott), the 1910s era sawmill ruins, and the remains of the community of Dow Springs, which dates to the 1880s (and apparently was big enough to have its own post office!). The trail meanders through several pretty wetlands, formed by the reliable Dow and LO Springs - these kinds of ponds are definitely uncommon above the Mogollon Rim!

Eventually, the shallow canyon begins to open up and before you know it you'll be alongside the chasm of Sycamore Canyon. The trail sticks close to the rim, with unrelenting views broken only by the occasional dip into tunnels of Gambel's Oak. At about the half-way point of the loop you'll get to the signed "Sycamore Canyon Vista," which offers no better views than at other points along the trail, but is road-accessible (a signed 0.5 mile side trail leads to the parking area).

Past the vista the trail continues along the rim to Sycamore Falls (seasonal) and the Paradise Forks climbing area - bring your rack if you're looking for a multi-sport outing!

Past Sycamore Falls, the trail angles away from the canyon rim and follows a shallow and rocky streambed to the Pomeroy Tanks. These natural depressions capture water in sculpted rock basins.

After Pomeroy Tanks, the trail crosses Forest Road 13. A right-turn here will short-circuit the loop if time is pressing or you've had enough. Beyond the road crossing the trail climbs (gently at first) up KA Hill - an ascent of more than 600 feet. This section of trail is actually one of the smoothest and least rocky on the entire route. The summit of KA Hill has a rocky outcrop with partial views over Garland Prairie toward the San Francisco peaks. A short, steep descent leads back to the car. 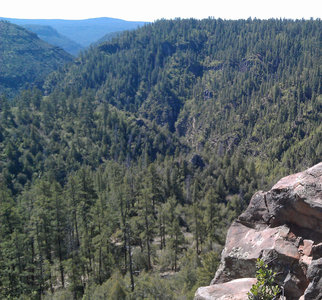