Sultan Out and Back

Hard pack singletrack with some rocks.

The Deer Valley and Park City areas can feel overrun with mountain bikers, but the Sultan Out and Back Trail is designated a foot-traffic only trail, so you're likely to have a more pleasant experience.

The Sultan Out and Back Trail starts near the Silver Lake Village area and shares its beginning with the Nabob Loop. Head east from the top of the Silver Lake Express chairlift along the bottom of the McHenry ski run. You'll pass underneath the top of the Homestake ski lift to get to the start of the Nabob Loop Trail. Run along the McHenry ski run for a short distance before branching off to the right on what looks like a narrower ski run. Stay on this easy, alpine forest lined path until reaching the Nabob ski run. Instead of turning north back into the forest (on the Nabob Loop) continue straight east across the Nabob ski run to cross under the Wasatch Express ski lift that you can see from here.

The trail contours gently around the broad hillside through dense pine forest and then into a huge aspen grove (called the Triangle Trees area). Descend steeply into a canyon and cross another series of ski runs before ducking under the Sultan Express chairlift. The grade eases again for the remainder of the way down to the trail's end at a scenic deck with picnic tables. Take in your fill of the views and then retrace your steps back up to the start for a 3 mile roundtrip run. 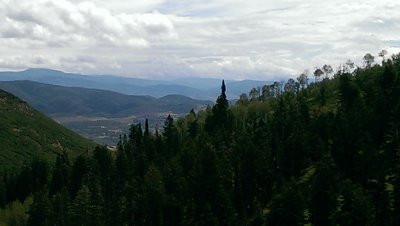 Deer Valley Out and Back