“One of the most physically challenging trails in the Kokopelli Loops between Loma and Mack. ”

The two ridgeline trails, Moore Fun and, to a lesser degree Mack Ridge, are the most physically demanding trails within the Kokopelli trail network between Loma and Mack. They also offer up some of the most spectacular views in the system.

Access Moore Fun from the west end of Mary's Loop at a saddle on the ridge with a parking area between Mack Ridge and Moore Fun.

Moore Fun begins at the eastern end of the parking area through a gate. The trail climbs at a manageable gradient and after a few switchbacks, it crosses from the southern aspect to the northern aspect of the ridgeline between Mary's Loop and Hawkeye Road.

From this point to the top the trail becomes increasingly difficult. After a steep switchback, Moore Fun crosses back to the southern aspect of the ridge. From here to the first prominent outcrop, the grade averages 10% for about 1/2 mile, however, near the apex of this section the trail does flatten out somewhat.

After climbing about 1-1/4 miles, you'll reach the crest with an amazing viewpoint offering a nearly 360-degree view of the trails below and a spectacular perspective of the Book Cliffs to the north. From here, descend east, then work your way up to the trail's high point at a second prominent outcrop, and another amazing vantage point.

The remainder of Moore Fun is almost entirely downhill. Initially, the trail switches back and forth on the northern aspect before crossing a flat pass heading south. The descent on this southern aspect is Moore Fun's most rugged section, with numerous rocky step-downs and steep sections.

At the valley floor, Moore Fun crosses a doubletrack and finishes smoothly out to the gravel Kokopelli Trail road. 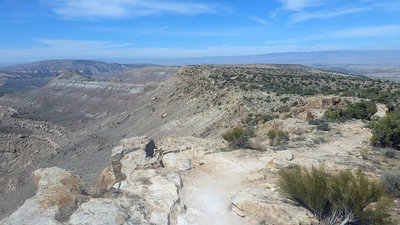