Bendix Woods County Park was once owned by the famed Studebaker Automobile Corporation. 840 acres were purchased in 1926 and became the first automobile proving grounds in America. Various road conditions were simulated to test their cars. Although it was a testing facility, Studebaker maintained the grounds as a natural area. In 1938, they planted 8,000 pine trees that spell the their name "STUDEBAKER" when viewed from the air. You can still see it today on the map above running north-south for a half a mile. The trees were added to the National Register of Historic Places in 1985 and in 1987 were featured in the Guinness Book of World Records for the longest living advertisement.

The proving grounds were sold to the Bendix corporation in 1963, which in turn donated 195 acres to St. Joseph County to establish the county park. The rest of the acreage is still being used as automotive proving grounds today. Bendix used the grounds until 1996, selling it to Bosch who then sold the land to Navistar in 2015.

On the Road: Several parking lots are located along the trees. 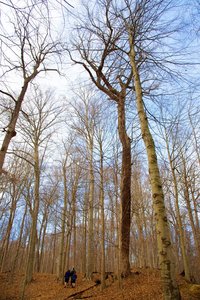