“A pleasant trail through a mixed oak-madrone-pine forest to a piece of Southern Oregon's history. ”

The trail is generally open all year but it can be a pretty warm run in the summer months.

There is limited roadside parking at and near the Panther Gulch Trailhead. There are no amenities at this trailhead and no potable water along the trail. Carry adequate amounts of water with you.

Hydraulic mining was the principal form of gold mining in Southern Oregon. This type of placer mining uses water discharged (through a nozzle called a "giant") under high pressure to wash away gravels and alluvial deposits, making a slurry that can be run through a sluice box or other equipment to recover the gold. It required considerable quantities of water, which was usually conveyed, often over long distances, in a ditch. Water pressure (the "head") was created by having the intake of the ditch at a higher elevation than the giant.

In the mid-1870s, J. T. Layton built (using Chinese labor) a 21 mile long ditch to bring water from upper Williams Creek to his mine in Ferris Gulch. This mine is considered by the Bureau of Land Management to be the first hydraulic mine in Southern Oregon. Use of the ditch for mining continued at least into the 1920s and perhaps as late as 1940. After that the ditch fell out of use for mining and was eventually abandoned. In the mid-1990s the Bureau of Land Management cleared part of the ditch for a trail that travels in and out of federal lands, but that too fell into disrepair. More recently, a local community group has been clearing swaths of the trail for use by hikers, mountain bikers, and equestrians.

This northern section of the Layton Ditch Trail starts at Panther Gulch and goes north to just past the Chinese Wall. There is a trail marker and an interpretive sign at the trailhead. After 1.6 miles of essentially level travel from the trailhead, you come to the edge of private land at Cherry Gulch and two now abandoned greenhouses, the construction of which destroyed a section of this historic ditch. Here the trail has been rerouted down and across Cherry Gulch to an old road on the other side. After 0.6 miles along this old, level road, the ditch and the singletrack trail next to it reappear.

At 3.2 miles from the trailhead you'll reach the historical feature known as the Chinese Wall. Here a rocky outcrop prevented the relatively simple digging of a ditch in dirt. The Chinese laborers (see also the Gin Lin Mining Trail #917) who were building the ditch blasted a 6-foot deep channel through the outcrop and used the resulting rocks to construct walls to support the ditch. The ditch is no longer working but these walls are still holding strong after 140+ years. An uncleared section of the trail continues along the ditch for about another 0.4 miles to where it has been overtaken by a clearcut.

Several species of local wildflower usually appear in the Spring. Poison oak is not a problem if you stay on the trail but could be if you leave it. The same can be said for ticks (in the Spring) and rattlesnakes (in the summer). 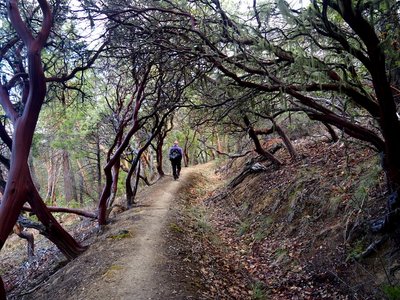 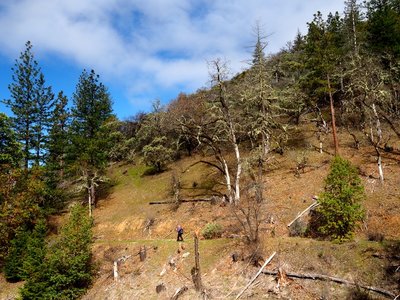 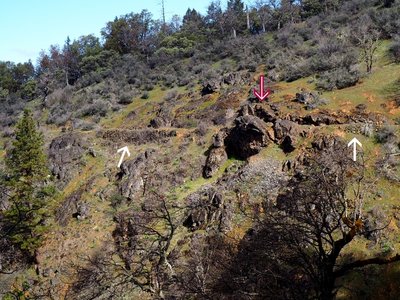 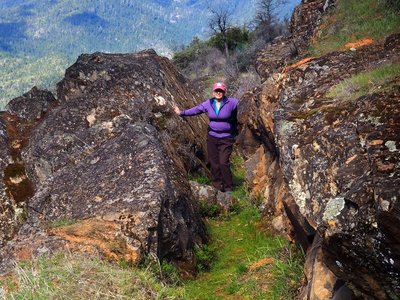 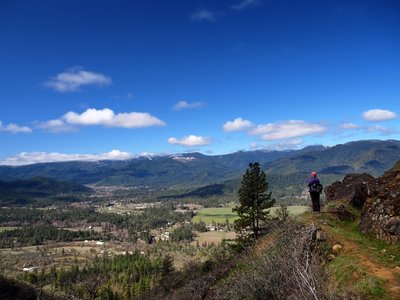 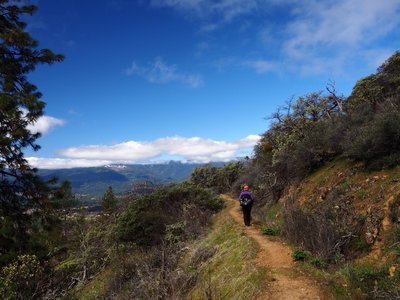