“A nice and easy course for beginners. ”

The route is a multi-use trail for mountain bikers and runners.

This is the first trail route in the province of Groningen. In addition to trail running, there is also a mountain bike route, bike route, beach, pavilion and campsites. There are plenty of challenges and a lot of nature around the Zuidlaardermeer.

Download the route with Trail Run Project mobile app before you head out! You can also follow the route by the white sign with two footprints on it.

Do not leave any valuables in the car. During the winter period, the Beachclub Vifero is open to a limited extent.

PAY ATTENTION: Running this route is entirely at your own risk. The municipality of Midden-Groningen and/or volunteers are not responsible for any damage to you, your material, or third parties!

This run in and around the Meerwijck area has a total length of 13 kilometers. That distance has been obtained by the many curves in this area around Meerwijck and the Gorechtpark.

The route is challenging with a number of surprising paths and beautiful small climbs. Occasionally the route can even be called spectacular, such as at the small bridges in Meerwijck.

The majority of the route is made for the novice and/or average runner. You do have to take other visitors into account, the route is also part of the Meerwijck Mountainbike route, please allow each other space.

The route is marked with a white sign with two black footprints.

The area around Meerwijck is very varied; from beautiful polders, meadows to forests. This area is still subject to change. The polders also serve as water storage, in times when a lot of water falls. You can also come across Scottish Highlanders and wild horses. But also special birds and other animal species. The Gorecht Park is also part of this route, the park was laid out in the sixties of the twentieth century. The park is fifty hectares, a scouting group is established and you can also visit the NME building of Stichting Natuur- en MilieuEducatie Hoogezand-Sappemeer.

The Zuidlaardermeer was created naturally, through a combination of a reduced water drainage capacity north of the city of Groningen and a reduced sponge effect of the peat bog in the source area of the Hunze. In the Middle Ages, due to the direct connection with the sea, there was a lot of flooding in this area due to storm tides. This ensured that it became bigger. Today the area is a favorite with nature lovers, for example, to spot the rare white-eared tern, beaver or otter 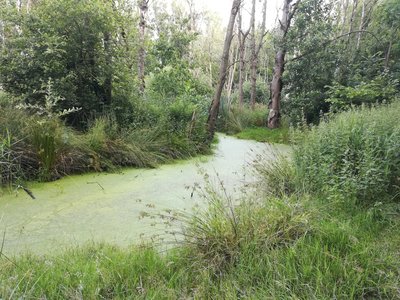