“Tough 100-mile loop through a nature preserve in the scenic Bavarian Alps with 24,500 ft of climbs. ”

A loop course in bowtie form which offers spectacular views from the summits and passes alpine farm pastures, lakes, and creeks. Halfway into the run, you'll pass the starting point to pick up further supplies. There are several points where the run can be shortened to any distance between 20 and 100 miles. The full 100-mile route features 24,500 meters of climbing. This is the route of the Chiemgauer 100 mile race which is held on the last weekend in July. However in 2019, it is on the first weekend in August.

There may be some soggy parts and some sections where stepping off the trail may result in deadly falls.

There are several natural springs with drinking water along the trail; also there are some huts catering simple foods and drinks.

From the Biathlon Stadium "Chiemgau Arena" near Ruhpolding, you start out on gentle trails along a creek to the east side of the Rauschberg mountain. You contour along it a little and then go north past Froschsee Lake up to Zinnkopf summit and down to the village from Eisenrzt. Further trails bring you to the village of Hammer where you start climbing the Teisenberg partly on a very faint trail.

Below the summit, there is a hut with food and drink for sale (around 20 miles). You descend on a fire road only halfway and after some more ups and downs, you enter a nicely rolling trail to the Steiner Alm (food, drink) and through a wet pasture to Adlgass (35 miles, food, drink, and car accessible).

Now there is a really steep uphill to Kohler Alm, but you'll be rewarded with spectacular views from the top and a technically difficult downhill on the other side. Beautiful trails will bring you past the HllenbachAlm (food, drink) to a steep staircase to the Weissbach gorge which you'll follow up to near the creek's source.

Then you climb again across a very steep wooded mountain flank (some steel rope installed for safety) past a farm until you reach a technical downhill to the Traun River. You then pass a beautiful little lake and return to the starting point (50 miles).

Next is a steep climb to the Unternberg Mountain saddle followed by rolling terrain to the Brander Alm (food, drink). A steep, and often hot, climb brings you to the magic Hrndlwand meadow, which is arguably the most beautiful part of the course. A brutal downhill brings you to mellower terrain and past the Langerbauer Alm and Jochberg Alm (food, drink) to your next summit.

Heading north, you follow the Weissachen Creek to the Kohlstatt parking lot (70 miles). From here you climb steeply a black diamond ski slope and cross to the halfway station of the Hochfelln mountain cable car. Some ups and downs bring you to Maria Eck (food, drink, cars, and a scenic church building).

For a short while, you then follow a paved bike trail before crossing the road and eventually reaching a beautiful shady little trail (one of my favorites!) which brings you nearly all the way back to the start. Either you can cut it short here or you have the option to climb the Hochfelln mountain, to reach the high point of the race on a little-known trail (90 miles). Now you really deserve the beer which you may buy in the restaurant which is just next to the summit!

After this, you'll descend first south, then east, past Thorau farms (water). and around Reitstein mountain down through the enchanted forest to Brand. On the other side of the valley you climb a little ways toward Unternberg mountain and then contour it only to finally descend to the Southern end of Ruhpolding village.

You cross the river Traun and turn south to return to the Chiemgau Arena and the finish.

Best in late springtime for wildflowers and in the fall for colors and views. Grouse, salamander, chamois, and other animals may be seen. Nice blueberry patches along the trail in late summer.

The race has been held since 2005. Some remnants of the salt and ore mining activities from the late middle ages can be seen. 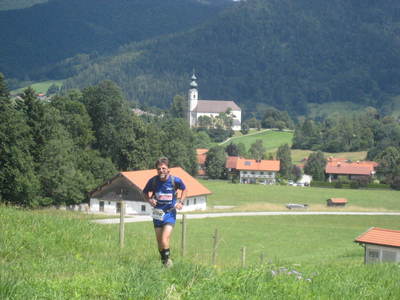 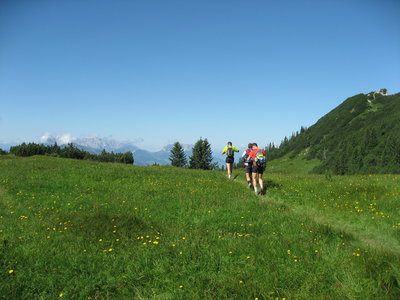 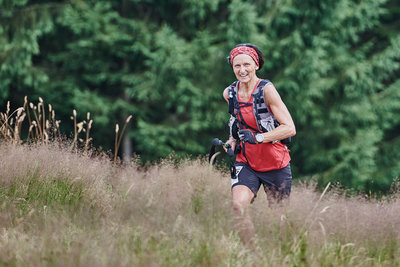 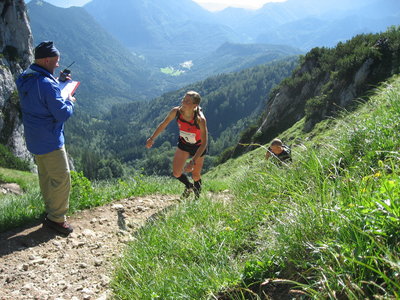 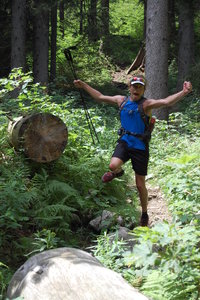 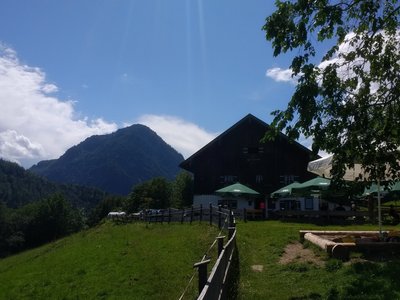