“A short loop leading to Lovelock Cave above the prehistoric shores of Lake Lahontan. ”

This trail leads to the historic Lovelock Cave, many artifacts of which are housed in the museum 20 some miles away. The area was significant due to the importance of the region to natives for food (the lake wasn't dry in those days) and the caves in the region provided shelter, of which this was one.

Bring plenty of water, and let someone know you are headed here. The road is well graded most of the time, but it is exceptionally out of the way and a minor car breakdown could lead to a serious problem without some basic preparation.

This trail, while short, is particularly good due to the BLM's interpretive signage along the way. After leaving the parking lot, follow the trail headed away from the cave and up into the hills above it. The path is well graded and marked by rocks along the sides of the trail. About three-fourths of the way into the trail, you'll see a beautiful overlook of the valley (which was once Lake Lahotan); if you squint just right you can see Humbolt Lake, but the sun will play tricks on your eyes in this area! Round the overlook and you begin to descend rapidly to the base of the cliffs wherein the cave lies.

Spend some time in the cave, and you'll get a sense of what a relief this must have been to the residents during the heat of day. More BLM signage tells the legend of the cave and of the artifacts that were excavated during the Guano mining. After leaving the shelter of the cave, hug the cliffline and you'll be rewarded by another lovely view of the Humbolt before returning to your car. There are other trails to explore in the area if this one gets you excited, most of those being unmarked.

The cave is on the National Register of Historic Places and the first site in the Great Basin region to be excavated. The cave is estimated to have been used from 2600 B.C. all the way up to the mid 1800s. 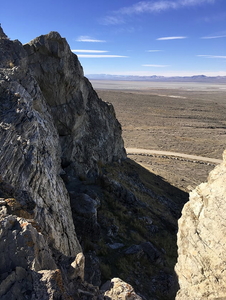 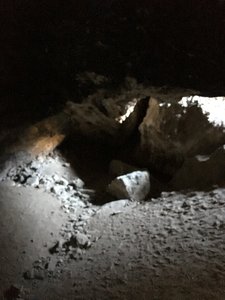 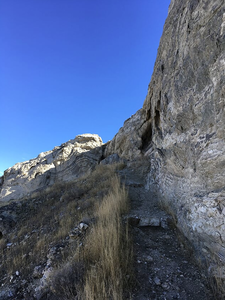