“This run follows a popular mushroom picking path leading from the Sevaberd Fortress to Geghashen village. ”

Cell service is available throughout the route, and the 911 emergency service operates throughout Armenia in case of any accidents. Be sure to bring bottled water!

In order to reach this trail, the most convenient option is to take a taxi from Yerevan to Sevaberd. This will cost between 3,800-4,800 AMD. It is recommended to take a taxi with a working meter (be sure the driver uses it), or agree on a price beforehand. There are also buses to Abovyan (a nearby town), that leave from Yerevan. From Abovyan, public transportation is available to Sevaberd village. This usually costs around 2,000 AMD one-way.

This run follows a popular mushroom picking path from the Sevaberd Fortress to Geghashen village, on the slopes of the Gegham Mountain Ridge in the Kotayk province. The path goes through wild fields, over rolling hills and deep gorges. Though beautiful in all seasons, it is most often done in spring and autumn from April to October, due to the abundance in mushrooms such as champignons and blue vein mushrooms. Although many of these are edible, no mushroom should be eaten without checking with an experienced local, unless runners are knowledgeable in mycology and mushroom hunting, especially with regards to this region.

Azhdahak Mountain, the highest peak of the Gegham Ridge, at an altitude of 3,597m, is visible on this run. Sevaberd Fortress (Black Fortress, in Armenian) is also located along the road to Sevaberd village. It is a notable fortress, built in black stone, but a lack of scientific and historic research into its origins means there is little information about it. The down layouts of the castle are cyclopean, while the upper walls are reminiscent of medieval architecture. In this regard, the foundation of the castle has been dated from around the 1000-2000 BC to medieval period.

Along the route, runners will also encounter Saint Georg Church. The inhabitants of Geghashen village, who had emigrated from the cities of Western Armenia – built Saint George Church (Surb Gevorg, in Armenian) in 1870. The church is still operational, and holds many wedding ceremonies throughout the year.

There are hotels in Geghashen where runners can rest overnight, before returning to Yerevan.

Flora: Besides the mushrooms on this run, Kotayk’s flora is rich in herbs, bushes, and forests. The flowers along the route sustain farms in the region, and many are used for medicinal purposes as well. Flowers commonly found in this area include chicory, sage, valerian, cornflower, nettle, plantago, white bryony, and achillea. Locals from the area typically harvest wild herbs, to eat and make tea with, including thyme, which is known to reduce blood pressure.

Fauna: The fauna of the area includes mostly small animals, such as foxes, rabbits and mice–although occasionally their predators, wolves, descend into these valleys. There are a wide variety of birds, butterflies, insects and beetles, especially in spring. In the hot summer months, care should be taken to avoid dangerous encounters with snakes. 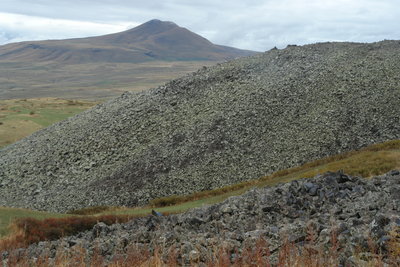 Goravan, Not set (Republic of Armenia)