“This trail makes for the quickest ascent to Katahdin and Baxter Peak. ”

Parking is very limited at the trailhead. Reservations are required.

The Abol Trail is the most direct route to the summit of Mt. Katahdin and Baxter Peak. Depart from the Abol Campground and head northeast. The trail starts to rise through broadleaf temperate forest before transitioning to boreal forest below Abol Slide. The trail surface is packed dirt with many rocks, boulders, and roots.

At this point, the trail bypasses Abol Slide proper due to unstable conditions on the upper part of the slide. Many switchbacks snake up a ridgeline with as many views to the south and west. This section of trail is even steeper and rocky. As the trail progresses up, the rock size increases as well. Eventually, the trail reconnects with the old Abol Trail (put out of commission after extensive damage) at the top of the slide above tree line. From this point to the tableland, the trail consists of very steep terrain and large blocks for about 1/3 km (1/4 mile) and 200 vertical meters (650 ft). The trail is roughly class 2+ (Mount Blanca in Colorado for comparison). The remaining part of the trail is flat and easy. The trail joins the Appalachian Trail at Thoreau Spring. The tableland on Katahdin is alpine tundra with rare and fragile plants. Be sure to be conscious of the trail location and where you place your feet.

This trail is, again, the most direct route to the summit and slightly easier than Saddle Trail because of the shorter distance. It is not, however, the least steep trail.

Fragile alpine vegetation grows above tree line – be sure to stay on marked trails to minimize impact.

This area is spectacular when in bloom in late June. 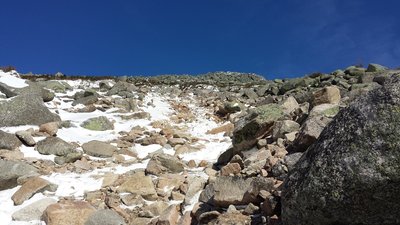