“Make a rugged, difficult climb up scree fields to cottonwoods blooming in a desert mountain oasis. ”

The Tom Mays Unit is open from 8 am to 5 pm daily. Off-hours access is permitted and is via a small parking area at the gate off of Transmountain. Overnight camping is available.

El Paso is in the desert, so plan around the climate. Summers are regularly in the 90's or above; winters will drop to the 30's and 40's. Lightning storms are frequent in the late afternoons during the warmer months. Winds are frequent and gusts over 50 mph are not unusual. Dust storms in the late spring can be hazardous and reduce visibility to less than a quarter mile. Check the weather before you go, and let someone know where you'll be.

Footing can be very difficult in the scree fields of this trail, particularly in wet conditions. Slow down and use caution.

To call any trail in West Texas rocky is an understatement, but West Cottonwood Spring pushes the definition. This trail is comprised almost entirely of a scree field at a steep grade. This trail is a difficult and generally unpleasant run, especially when better options exist connecting at either end. Its saving grace is that West Cottonwood leads to a small, spring-fed oasis at its top, where a small grove of cottonwood trees and other plants bloom. A rarity in the desert, it makes for a semi-popular local run.

The trailhead is located at the end of the first parking lot to the right after entering the Tom Mays Unit. The trail is a wide singletrack, littered with rocks deposited by years of thunderstorm runoffs. Agave Loop turns off to the right almost immediately and is the better way up. For those pressing on, about a quarter of a mile ahead the trail encounters a talus field taking up the entirety of the trail.

The densely packed, basketball-sized rocks make for a very technical and difficult run. A few brief portions of dirt provide some relief to the rock hopping, but in general, pathfinding through scree will continue for most of the trail. A small cave, covered by a grate, is located just after the field starts to the right; it is typically locked by park staff but is opened for guided tours throughout the year.

At the half mile point, the trail passes Agave Loop and Mundy's Gap before turning right and making a steep climb up a canyon. Keep to the left, where a small dirt singletrack provides some relief to the scree. Cottonwood trees will be visible up the hill and to the left. At a rusted water tank shell, the trail turns left and climbs toward them. A few steps, made from logs, have been placed to help in the steep ascent, though several have crumbled away over time. The unmarked turnoff to the new Upper Agave trail is about halfway up, on the right.

The trail ends at the base of a large cottonwood tree with a few benches at its base. A narrow path through the trees to the right continues as North Franklin Ridgeline.

Being a wetter area this trail a little different vegetation. At the lower elevation there are yuccas, sotols Apache plumes and some cacti. Higher up you'll find sumacs and cottonwood trees. Also because of the spring there are also numerous species of birds. 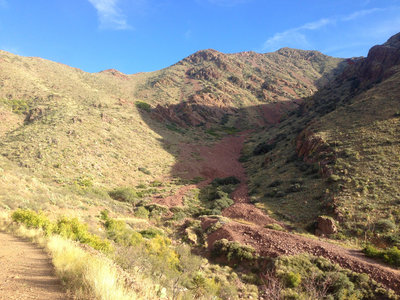 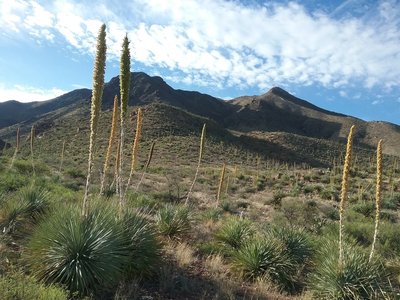 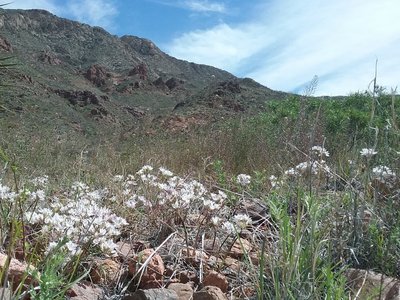 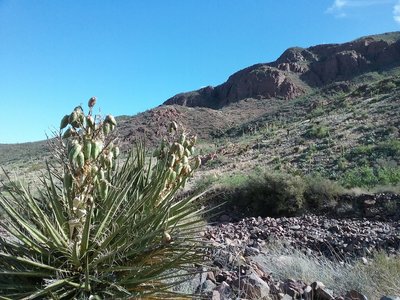 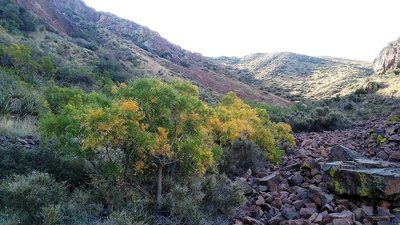