Branch off the Box Elder Trail (which circumnavigates around the south end of Box Elder summit) and head northwest. This trail is one of the least used in the area, but it is generally easy to follow. The trail moves along the east and northeast slopes of Box Elder crossing several moderately steep faces as you work towards the wide box elder saddle.

*Note: This first 2/3's of the route crosses several notoriously volatile avalanche slide zones. Because of this, the trail should be done only after a significant portion of the snow is melted. Depending on the year, June is typically a safe bet for running. Regardless, use caution and consider using the Deer Creek Trail to reach the saddle.

Once you reach the ridgeline, you have the option of following the branch off south towards the summit of Box Elder. To finish the trail and reach the saddle crossroads, continue north following the obvious track along the ridge. After mild elevation gain, you'll soon reach the crossroads at a large meadow along the northern most edge of the saddle. Trails leaving this crossroads lead east, down to the Granite Flats Campground, west, down Dry Creek Trail to the city of Alpine, or north, to the peak Unnamed 11,036ft. 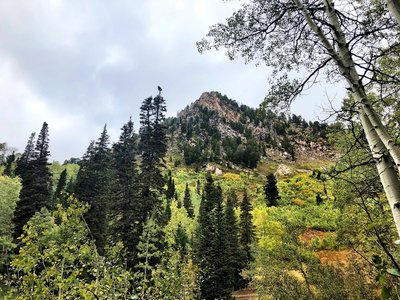