“The trail begins at Fire Lane 7, crosses the Wildwood Trail, and extends to the Leif Erikson. ”

The upper portion of the trail has some exposed roots, which can be hidden under fallen leaves.

The Hardesty Trail gently descends from Fire Lane 7, makes a slight jog at the Wildwood Trail - National Recreation Trail, and then follows Hardesty Creek down to Leif Erikson Drive at about mile post 9. The trail and creek were named after William B. Hardesty who worked for years, dedicating his efforts to preserving forests and other natural scenery.

Beginning about 250 yards below the gate on Fire Lane 7, the trail leads off to the left and enters an area full of plant life in soil that is rich and stays moist nearly year round. Seasonal wildflowers such as the Western Trillium are abundant as are Oregon Grape, Sword Fern, and Lady Fern. Lichens and mosses cover many of the branches of trees such as Vine Maples.

Partway down the top portion of the trail the Wildwood Trail may be seen winding its way below on the left side. After roughly three-tenths of a mile, the trail comes to the Wildwood, where you go to the right for a few hundred feet and then it follows Hardesty Creek the rest of the way down.

This section of the trail contains a wide variety of plant life, including shelf fungi, Western Hemlock, and Western Red Cedar. About halfway down, you'll come to what many consider the centerpiece of Forest Park, the Big Stump. The very large stump is the remains of an old-growth Western Red Cedar that was logged years ago. It is several feet in diameter and likely the largest of its kind in the park. Near the top you'll see springboard notches, which are slots cut out of the trees so loggers could stand on them and fell the tree at a point where the trunk narrowed to make it easier to cut.

You'll also see other stumps that are hosting re-growth trees such as cedar, elderberry and other varieties. The time will eventually come when these stumps will rot away, leaving the roots of the trees exposed to the point where they enter the ground.

A wide variety of understory shrubs as well as alder, cedar, hemlock, fir, seasonal wildflowers and fungi are abundant on this trail. Finches, wrens, crows, woodpeckers, chipmunks, and chickarees are common. Signs of black-tailed deer can usually be spotted and the territorial squawk of a raven would not be unusual.

Land Manager: City of Portland, OR - Parks and Recreation 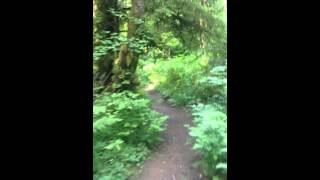